Published in PharmaTimes magazine - May 2019

The dynamics of the pharmaceutical industry’s development strategies have drastically changed over the last 20 years. Opportunities to develop first-in-class or fast-follower treatments with marginal differentiation that address high prevalence conditions are limited. Instead, more companies are investing in rare diseases, unmet needs and conditions with current treatments hampered by safety, efficacy, convenience or other issues. Government agencies have encouraged these activities by offering accelerated paths to market through the award of regulatory designations.

The therapies identified in the Cortellis Drugs to Watch 2019 report, recently released by Clarivate Analytics, underscores this trend. To develop the annual report, Clarivate’s Cortellis team analysed large sets of market and scientific data to identify seven drugs projected to launch in 2019 that are likely to achieve blockbuster status – defined as $1 billion in annual sales – within five years, or by 2023.

A high proportion of those on this year’s list address rare and orphan diseases, with all seven drugs achieving at least one regulatory designation in at least one country, including:

Here is a look at the seven expected blockbuster drugs along with their forecast five-year sales, current as of the March 2019 release of the report. See Table 1 for details on their regulatory paths. 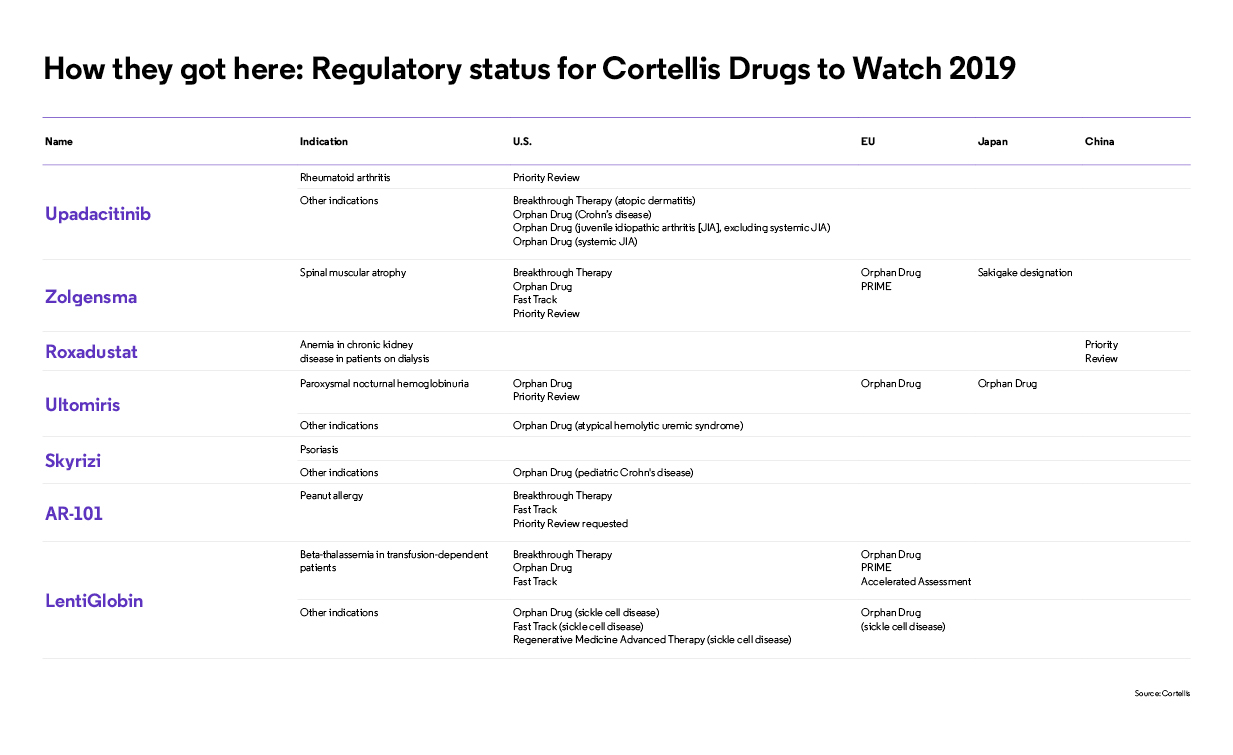 Upadacitinib, from AbbVie, treats rheumatoid arthritis. The drug is an orally dosed inhibitor of an intracellular target called JAK1. Dysfunction in the regulation of the JAK family of moleculesis implicated in the aberrant production of pro-inflammatory mediators that are involved in the pathogenesis of rheumatoid arthritis, and inhibition of JAK proteins is an established method of controlling the symptoms of this disease.

Upadacitinib was filed for approval in the US and EU in December 2018 and accepted for US Priority Review in February 2019. The drug is expected to generate sales of $2.20 billion for 2023.

In the third quarter of 2018, AveXis filed Zolgensma for approval in the US, EU and Japan for the treatment of SMA type I. The company expects to launch the drug in the US and Japan in the first half of 2019, and in the EU in the second half of 2019. The sales forecast for Zolgensma is $2.09 billion.

Roxadustat, from AstraZeneca, FibroGen and Astellas, targets anaemia in chronic kidney disease (CKD). The first-in-class inhibitor of hypoxia-inducible factor-prolyl hydroxylase, or HIFPH, was approved in December 2018 in China for the treatment of CKD- related anaemia in patients dependent on kidney dialysis. Launch is expected in the second half of 2019, and approval for use in patients not on dialysis is expected in mid-2019.

The drug is under regulatory review in Japan, where a filing for anaemia in CKD patients on dialysis was submitted in October 2018. A US filing is expected in the third quarter of 2019. Roxadustat is expected to generate sales of $1.97 billion by 2023.

Ultomiris received approval as an Orphan Drug from the FDA for adult patients with PNH in December 2018, just six months after the drug was filed, and two months ahead of the FDA’s target date for the completion of Priority Review. It was launched in the US in January 2019, making it the first of the 2019 Drugs to Watch to reach the market. In the EU and Japan, approval of the drug is pending, following acceptance of regulatory filings in 2018. Sales are projected at $1.93 billion for 2013.

Skyrizi treats psoriasis. Developed by Boehringer Ingelheim and AbbVie, it is a monoclonal antibody that inhibits the pro- inflammatory cytokine IL-23. It will compete with numerous treatment modalities, including entrenched biological agents and biosimilar biologicals.

A regulatory filing for US approval of AR-101 in children and adolescents aged from four to 17 years was submitted in December 2018, with a request for Priority Review. However, Aimmune reported in February 2019 that the FDA had initially determined that the drug, as an allergenic extract, was exempt from the PDUFA process. This determination may mean that instead of expedited review because of AR-101’s Breakthrough Therapy designation, the filing may be given a 12-month target period. Discussions were underway between the FDA and the company regarding the review timeline. An EU filing is expected in the first half of 2019. A first-in-class therapy with no competition expected soon, sales for 2023 are forecast at $1.17 billion.

LentiGlobin, an Orphan Drug and Breakthrough Therapy from bluebird bio, corrects the defect causing beta thalassaemia, a blood disorder that causes life-threatening anaemia. Its only immediate competition will be donor stem cell transplant, which carries significant patient risks. LentiGlobin provides an allogeneic alternativeto autologous transplant. Instead of using donor cells, the patient’s own cells are harvested, genetically modified to produce functional beta-globin, and then infused back into the patient.

The initial studies for LentiGlobin in transfusion dependent beta thalassemia have focused on patients with non-beta0/beta0 genotypes; that is, patients who have some residual production of beta globin. In October 2018, the drug was accepted for regulatory review in the EU for non-beta0/beta0 adolescents and adults. It is currently in Phase III in the US. The sales forecast for 2023 is $1.12 billion.

As we track the progress of the 2019 Drugs to Watch, we are also looking back at the 12 launches our analysts predicted in 2018. All of those drugs have entered the market, as predicted. Of the drugs for which sales forecasts are available, all but two are still expected to achieve blockbuster status by 2022, paced by Biktarvy, Gilead’s HIV drug, with current forecast sales in 2022 of $6.03 billion.

The drugs on 2018’s list are all making significant impacts on their markets, and it will be interesting to watch the progress of this year’s. Covering a wide range of conditions, and with the recurring themes of rare diseases and unmet need, they represent a snapshot of the cutting- edge development that characterises the life sciences industry.

Article published in May 2019 Magazine