Communication between pharma, patients and wider healthcare has helped to create a solid foundation upon which the general public understands disease and, crucially, trusts emerging therapies. Now that vaccines promise a ‘way out’ of the COVID-19 impasse, pharma’s direction has never (ever) been more important

Just as the last track of the pitiful one-star-rated 2020 album played out, vaccines seemed to start dropping out of the sky like strikingly beautiful life-saving confetti. Suddenly, footage of tiny bottles amassing on factory apparatus punctuated every news bulletin. It was akin to a piece of installation art, with every identical vial appearing to represent one of us, while the endlessly moving conveyor seemed the perfect metaphor for our salvation; our great escape. Cautiously, we were dancing to a different tune – albeit socially distanced and, of course, wearing an absolutely bizarre array of face coverings.

Meanwhile, through myriad communication channels, news that we could soon be ‘set free’ entered our collective consciousness faster than a shopper who has just heard that ‘cashier number three’ would be opening imminently. After months of simply being arbitrary hooks for uncomfortable elastic, our ears could finally listen to the sweet music of optimism.

Amid this maelstrom of activity – in the lab, at the manufacturing plant, throughout the living rooms of a billion homes – there was the beating heart of global communication and, central to that, medical communications. Serendipitously for pharma, the last few years had also observed the most significant changes in its proximity to patients. It was as if everything that had been invested in the blossoming relationship between medicine provider and medicine taker had prepared it for this wonderful moment.

As approved vaccines started to weave their magic in the bloodstreams of elated pensioners around the country, there was palpable relief, but no fanfare to thank the life sciences industry. No pot-banging and no couples playing terrible clarinet arrangements – no suggestion that we all open our windows and play Aerosmith’s ‘I Don’t Want to Miss a Thing’ at 7.30pm on Thursday evening. And perhaps it was appropriate that we didn’t ferociously clap – there is no way that pharma’s notorious regulators would have let it through even the most basic safety test.

Nevertheless, there has been a vital awakening among patients regarding what the pharma industry does and where it comes from, even if the mainstream media insist on crediting the NHS, public health, David Hasselhoff and even the government for ‘delivering the vaccine’, while almost always omitting the central character of pharma!

Ultimately, when the green shoots of recovery finally appeared across the barren coronavirus terrain, there was always going to be a different kind of response. People are not ungrateful, they just have a different, growing relationship with pharma.

The basic NHS message has been communicated for 73 years, while pharma’s kinship with patients is much more nuanced and relies heavily on modernity. Although this means that the life sciences industry exists in a kind of twilight zone, the wider population do, in 2021, have a far greater understanding of pharma, its role and its motivations, than at any point in human history.

Furthermore, the digital era, the internet, social media, wearables, health apps and a hands-on role in their own healthcare has seen the incredible rise of Patient 2.0. Impossible 20 years ago, there has also been an era-defining meeting of minds between pharma and ‘end users’. Gradually, individuals and groups are developing bonds with pharma on a level playing field, while patient knowledge of treatment pathways, routes to market, participation in clinical trials and mental health have equipped them to digest, not just their own health journey, but the implications of the current situation.

Such dialogue has, mercifully, helped to deoxygenate toxic belief systems as well, like those held by the boneheaded anti-vax brigade which – 15 years ago – may have gained traction. Patient power, evidently, comes in many forms.

The narrowing gap between companies and the patients they serve has surfaced due to a decade of engagement, partnership and conversation – not through sterile one-sided flim-flam, but candid multichannel communication. It has also happened through the dismantling of myths and the realisation that industry is fuelled by human beings who want to accomplish complicated missions with patient involvement.

One of the companies to have pioneered peer-to-peer relationships, encouraged people to take control of their health and increased patient participation is ICON. Michael Pellegrino, the company’s SVP, Head of Scientific Services, Global Medical Communications, has witnessed several transformations in approach during his long career.

“The industry has increasingly recognised the benefits of different communications for specific purposes,” he reflects. “The many life-changing and scientific advancements coming out of pharma and its partners can now be tailored through a vast choice of communication channels, ensuring that material reaches a whole host of audiences.”

This enhancement in communication and openness has also been the catalyst for greater partnership working, as profoundly demonstrated by the Pfizer/BioNTech (see ICON’s press release) and Oxford University/AstraZeneca duets. These record-breaking harmonies, however, have been the natural progression after many years of fertile, culture-defying collaborations.

“Pharma has played a significant role in driving the clinical imperative that has resulted in greater partnering among themselves, with the clinical community and patients themselves,” Michael observes. “These partnerships have been essential in raising the bar for standards of care in a multitude of disease areas.”

Interpharma partnerships have continued to yield a much more productive and symbiotic union between stakeholders, accelerated by greater transparency, data sharing and the patient voice growing in stature, resulting in much clearer treatment pathways.

Indeed, ICON has seen how pharma company partnerships have transformed immunotherapy – notably immune checkpoint inhibitors (ICIs) which target many different types of cancer, among other diseases. This exciting new chapter began ten years ago, with the discovery of ipilimumab, and has continued with the discovery of other ICIs, such as pembrolizumab.

It is clear that pharma-patient partnerships will help to propel healthcare even further into unchartered territories. In the historically, rather academic and, often, unapproachable medical publications space, pharma companies have already been leading a crusade to shake up the status quo, with patients co-authoring peer-reviewed articles which have subsequently appeared in medical literature.

Michael sees this game-changing moment as a significant step towards a promised land in which patient expertise is a highly credible currency. “The increasing acceptance of patients, who are not necessarily medical professionals, as participating authors – fully compliant with guidelines – is a truly paradigm-shifting milestone in medical communications,” he enthuses.

In this realm of incorporating lived experiences, ICON has also been keen to involve patients in the creation of trail-blazing ‘patient lay summaries’ or, as they are also known, Plain Language Summaries. “These are invaluable companions to complex clinical trial information and results,” explains Michael. “They are increasingly important when it comes to patients driving the transformation of medical communications rather than professional expertise”.

The medical communications ecosystem is growing exponentially, but the core fundamental principle still relies on the conveying of a scientific story that makes clinical sense and is scientifically accurate. Mind you, in today’s inclusive healthcare environment, it is also expected to resonate with the end-user in a language that is understood by everyone.

The aspect that sets this era of medical communications apart, however, is the opportunity to contextualise, inspire and become the catalyst for a new study or be the reason why someone shares his or her own disease experience. It is not enough these days to outline the hard practicalities – good communication should yield hope and create an enduring impact.

For the pharma industry the quantum leaps of the last few years have been as much about discarding tradition as embracing the future.

“In exploring the digital world of capabilities a decade, or even five years, ago, it is safe to say there was a lot of trepidation, but now pharma has a much greater understanding about the potential of digital,” says Michael. “The opportunities that digital or virtual can deliver, particularly in the arena of new data generation, are now coming into much sharper focus.”

For many companies at the forefront of the medical comms revolution the inclusion of interactive infographics, digitally enhanced manuscripts, technology to make content more appealing (and readable) on small screen devices and dedicated microsites to house compendia of results have created not just a new landscape, but a new language.

And as we all endeavour to navigate our way through the final arduous yards of the COVID-19 saga it may well be our fluency in this neo-medical language that finally paves the way to normality.

In the final analysis, our own greatly improved relationship with medicine has carved a new future – a future that is so close you can almost touch it. 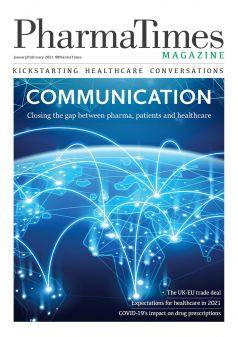