The last decade has brought pharma and the NHS much closer, but while the union is often inspirational, it is also – like any long-term relationship – a bit complicated. Three experts discuss the future of the pharma-NHS dynamic.

The pharma-NHS story is one of the most enduring soap operas in the world – yes, even older than The Archers. And, like all continuous dramas, there is a constant supply of conflict, resolution, partnership, achievement, opinion and, quite often, miraculous storylines. The only real difference is that our two central characters don’t live on the opposite side of the street – instead they reside in different sectors.

The intrepid vaccine roll-out demonstrates the very best of the pharma-NHS relationship, delivering the astonishingly prolific healthcare engine room that aims to finally bring an end to the COVID-19 narrative.

Another mainstay of the soap opera formula is ‘envy’ and, make no mistake, other countries would love to have the magic that happens when UK life sciences and the NHS combine. And maybe, just maybe, it is the differences in history, infrastructure and culture that allow the majesty to flourish, especially under the most challenging of circumstances. There is no doubt that the rapid cycle, in recent months, of research, discovery, trial, approval, manufacture and delivery has represented the beating heart of trail-blazing British healthcare – an intricate system which relies on both arenas to perform, even when the script is changing with every hour that passes.

The colossal number of patients already vaccinated is a glowing testament to the resilient and compelling pharma-NHS relationship.

It hasn’t just been an international crisis that has been the catalyst for such phenomenal feats of inter-sector teamwork. In many ways, the preparation for this situation has been years in the making. The plot points of the pharma-NHS kinship have been established during a decade of partnership working, transparency, data sharing and a much greater appreciation of digital.

It is no coincidence, therefore, that during this uniquely adverse chapter we have all witnessed a seamless and captivating cocktail of healthcare activity – sparked in the name of conquering the pandemic. In terms of the future, it is perhaps the virus, the manifestation of an imperfect world, that has provided the perfect blueprint for the ongoing pharma-NHS union.

Dr Mario Ippolito is Medical Director, Neurosciences & Rare Diseases, at Ipsen Pharmaceuticals and recognises how vital the evolution of the union has become. “It is important to reflect that the healthy relationship between these two key players has allowed all efforts to be focused on the common objective of protecting patients,” he says. “I hope this momentum will persist, because we have learnt during this difficult time that the UK has been a place where cutting-edge research is only made possible through healthy relations between public institutions and private companies.”

Bahar Turkoglu, Senior Director, Public Affairs at Gilead Sciences, agrees that the onset of the pandemic has encouraged the research community to link up and develop accelerated multi-agency systems. She explains: “Government bodies, clinical academic research experts, health authorities, regulators and the life science industry have all worked together in extraordinary ways. The question now is whether NHS and pharma can adopt these methods in a sustainable way, enabling them to become part of a ‘business as usual’ approach to clinical research.”

Daiichi Sankyo’s Medical Director for Cardiovascular, Dr Ravi Pawa views the impressive response as a golden opportunity for a wider societal shift towards healthcare parity. “The COVID-19 response has unlocked the potential when the NHS and pharma companies work towards shared objectives,” she enthuses. “It offers a sense of excitement as to what the future could look like and how continued collaboration can reduce the kind of health inequalities across the UK which have been highlighted by the pandemic.”

Increased life expectancy, groundbreaking therapies and the rise of the ultra-modern Patient 2.0 have all benefited from, or been hastened by, a greater kinship between pharma and the NHS. There is now a sense that these two mighty powerhouses are co-existing in the same ecosystem, with much higher levels of trust and a keener sense of each other’s place in the healthcare stratosphere. It is true to say that one cannot survive without the other – and while that conclusion may have arrived with some tension in the past – pharma and the NHS are much more likely to have a drink together in the Queen Vic (or The Rovers Return) than ever before.

Necessity is often the mother of invention and Bahar believes the rebooted pharma-NHS comradeship had to develop, and at speed. “Collaboration has drastically increased over the last decade,” she explains. “What has changed most notably is the ability of pharma companies to make an impact on patient care through the development of increasingly sophisticated and individualised treatments. In turn, the NHS has recognised the potential of these innovations and worked in increasingly close partnership with industry to ensure access for eligible patients.”

Dr Pawa has also seen a modification of approach when it comes to partnership working. She says: “We have adopted a ‘beyond-transactional’ model which takes a more holistic view of the challenges health systems face. For us it is important not to be seen solely as a manufacturer of medicinal products, but as a solutions-provider to the NHS. This has resulted in a relationship with the NHS based on mutual respect and – crucially – one which delivers better results for patients.”

Upholding standards and constantly upgrading options for patients has also been at the forefront of modernising healthcare relationships, according to Dr Ippolito. “Changes in the NHS have been driven by the need to contain costs and remain competitive,” he says. “The pharma industry has evolved to meet these high scientific and ethical expectations and, consequently, we have entered a brave new era of collaboration, with the common goal of generating even more value for patients.”

The presence of digital has been a major catalyst for closer pharma-NHS relations. From its initial role as an emerging character it is now a ubiquitous scene-stealing cast member which both pharma and NHS are beginning to fully embrace.

The opportunity to use cutting-edge technologies to analyse large volumes of data in a relatively short time frame has been a game changer. Everything, from finding patients for a new clinical trial, to generating evidence by analysing the efficacy and safety of a medicine, is becoming easier, enabling partnership working with the NHS to become more productive and efficient. “Digital technologies combat the disruption of services and can have a very positive impact while making sure there’s an efficient level of communication and alignment between different stakeholders,” enthuses Dr Ippolito. “This has also had a dramatic impact on patients, who can benefit from healthcare services remotely – from diagnosis to treatment.”

“The emergence of multiple digital channels has radically altered how we engage with our partners, including the NHS, and the pandemic has forced us to rethink how we interact,” adds Dr Pawa. “Daiichi Sankyo understands the power of digital health and its potential to improve care delivery. A number of our collaborative projects have sought to trial the use and adoption of innovative technologies as part of local atrial fibrillation pathways, and we’ve been really excited by the outputs.”

The digital age has, indisputably, built bridges between NHS and pharma, creating a virtual terrain which boosts interaction, creates connectivity and delivers huge benefits to patients. Bahar concludes: “The digital era has brought about new possibilities, both in the way patients access healthcare, and in our ability to use data to improve outcomes. It also enables us to influence changes in how services are planned and delivered, while collaborating in the development of optimal therapies, managing symptoms and combining with the NHS to help patients achieve a better quality of life.”

As pharma and the NHS stride into new ventures together, exploring their range and finding common ground, the oldest healthcare soap opera in the known universe thus continues. And now it’s unfolding 24-hours a day, seven days a week, patients have wandered onto the set and each episode is arriving faster than the next.

Ultimately, the pharma-NHS relationship will always provide exciting cliffhangers, implausible conundrums and absorbing characters – without them, this unending healthcare story would have nowhere to go!

All the elements that make the two entities different have – as the decades have passed – drawn them closer. It is not that the NHS and pharma have needed to become more alike, but they have developed a much greater understanding of each other. In that respect, it replicates all the great relationships in art, life and even among institutions. At the time of writing it’s never been in better health – and that’s something we can all believe in. 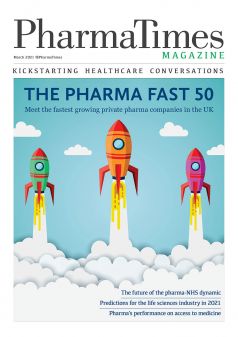