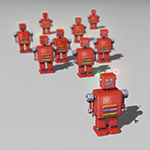 2015 is being hailed as the year of the biosimilar. In the initial three months of this year the first monoclonal antibody biosimilars hit the market – Celltrion Healthcare’s Remsima and Hospira’s Inflectra, copycats of Janssen/MSD’s autoimmune blockbuster Remicade (infliximab) – while the USA has celebrated the approval of its first ever biosimilar, Sandoz’ Zarxio, a follow-on of Amgen’s white blood cell stimulator Neupogen (filgrastim). Commentators are singing biosimilars’ praises, claiming we have entered a new, more affordable healthcare era.

It is an exciting development. Biosimilars – copies of approved off-patent biologic medicines that demonstrate no clinically meaningful differences in terms of safety, quality and efficacy – have been touted to hold much promise: from a market perspective biosimilars could be worth $25 billion, and allow healthcare savings of up to €20.4 billion in Europe alone, by 2020.

And companies are jumping on the bandwagon. Between 2013 and 2014 the biosimilars pipeline expanded 40%, with more than 700 follow-on biologic therapies in development and 245 organisations focused on this space. Big names are also showing interest, most notably Pfizer with its recent $17 billion purchase of biosimilars manufacturer Hospira. Meanwhile, in anticipation of the expected flood of products, regulatory guidelines for biosimilars have been adopted in more than 60 countries.

But just how much of this promise is deliverable? And to what extent will uncertainties around the approval process dampen biosimilars’ potential?

The world, it seems, has been waiting to see how the first biosimilars fare, particularly in the USA, where legislation was only introduced in 2010 with the passing of the Biologics Price Competition and Innovation Act. Indeed much of what we learn from the experiences of the first biosimilars will shape the market moving forward.

“Perhaps the most important lesson to take away from the Zarxio product approval experience is the importance of building a very solid foundation of analytical similarity between the proposed biosimilar and the US-licensed reference product,” says Bruce Babbitt, vice president, technical at PAREXEL International. Sandoz had also worked closely with the FDA via the newly structured Biosimilar Biological Product Development meetings to come to full agreement regarding all key aspects of the step-wise design of the drug. “Biosimilar developers need to commit heavy resources during the very early stage of development, rigorously accessing and evaluating many different lots of reference product to look for any potential differences between the proposed biosimilars and the marketed products,” Babbitt says.

It should also be borne in mind that Zarxio has been approved for use in Europe (as Zarzio) for several years. “It remains to be seen how the FDA approval process will play out for a biosimilar candidate that has yet to be approved elsewhere,” says Mari Serebrov, writer and analyst at Thomson Reuters BioWorld. Indeed, as Lincoln Tsang, partner at law firm Arnold & Porter, says, the challenge will be in what is considered an acceptable margin of difference in evaluating biosimilarity. And this will be made more challenging with the complex biosimilars such as monoclonal antibodies. Babbitt believes these biosimilars will require more comparative clinical data than future filgrastim copycats. Offsetting this, however, is that under US freedom of information a lot of data on the study designs and approach taken for Zarxio will be available to guide future programmes.

Meanwhile, the EU approval of Remsima and Inflectra is being seen as a “lighthouse event” for biosimilars. That Canada and Japan have followed the EMA’s lead suggests a strong level of confidence in the EU’s biosimilar path and approval process, says Serebrov. What is particularly interesting about the approval, adds Tsang, is the EMA advisory committee’s position on data extrapolation, which decided the clinical data submitted permitted extrapolation to all indications of the reference product.

These initial approvals in Europe and the USA will set a precedent, says Cecil Nick, vice president, technical at PAREXEL International, but he adds that regulatory requirements do change over time, which has already been seen with the relaxing of clinical requirements as regulators gain confidence in the ‘quality’ data forming the basis of biosimilarity. “On the other hand,” he says “requirements for establishment of similarity at the ‘quality’ level could become more exacting”. In the case of Zarxio, this criteria was extremely demanding “and if the same requirements are applied to other biosimilars this could prove to be a barrier to US licensure, particularly for new products where fewer batches have been produced at the time of filing”, he says. There is a similar concern in Europe. As a spokesperson from Lilly comments: “Many compounds considered biosimilars outside the EU would not make it through the strict EMA biosimilar approval pathway because they fail to meet the criteria.”

In addition to these uncertainties, the lack of regulatory harmonisation across countries will be a challenge in pulling together submission data, as is the FDA’s failure to issue guidance on interchangeability. “Just like other drugmakers, biosimilar sponsors need regulatory certainty,” says Serebrov. “They will look at how other biosimilars were approved to shape their development path.”

The promise of biosimilars could be further hindered by the current marketplace. While it is generally agreed biosimilars are less risky than innovative drugs, the fact a biosimilar can still punch a $75 million to $250 million hole in the R&D budget and take up to eight years to reach the market cannot be ignored. Add to that the estimated (and still hefty) 50% failure rate for biosimilars, the strong competition, including the off-patent cut-price branded biologic, and these drugs may not be the cash cow they were originally predicted to be. “There are certainly profits to be made in biosimilars but not at the rates that some envisaged a few years ago,” says Niall Dinwoodie, global coordinator of analytical testing, biologics testing solutions at Charles River Laboratories. “As the complexity of comparability studies has become apparent, many small companies have dropped out of the race.”

There is also the issue of market access. It was commonly understood that because biosimilars would sport a 15% to 30% (and in some cases 50% to 70%) price cut compared with the branded biologic, they would have a relatively easy market access ride. Now it is accepted that while the potential healthcare savings are still vast, the financial pressures on healthcare systems means a biosimilar’s cost efficiency will still be scrutinised. “Although generally cheaper than reference products, biosimilars remain expensive drugs,” says Serebrov.

Moreover it is now clear that approved biosimilars will not automatically be fit for substitution and interchangeable with the reference medicinal product. Regulators have insisted that “biosimilars are similar but not identical to the reference product”, says Tsang. In addition, heavy competition could put pressure on market access, as well as increase the need for an expensive marketing strategy to differentiate a biosimilar in the crowded marketplace, says Serebrov.

Manufacturers are quick to point out that there are additional values beyond cost savings, claiming biosimilars are not just about discounts. “Biosimilar competition guards against annual price increases for the innovator drug, increases access to life-saving drugs particularly in emerging markets, and expands the use of certain biologics in cost-conscious markets,” Serebrov says. In the UK, for instance, biosimilar filgrastim is often used in first-line cancer treatment because of the lower cost compared with the branded biologic, manufacturer Sandoz purports.

Meanwhile, Celltrion Healthcare has evaluated the budget impact of the introduction of Remsima in the treatment of rheumatoid arthritis, which showed that the total five-year cost saving across the UK, Italy, Germany and France would range from €96 million to €433 million. And in Crohn’s disease, the total five-year saving across the UK, Italy and France ranges from €76 million to €336 million, says Kim Ho-Ung, head of strategic marketing, medical affairs department at Celltrion Healthcare.

Perhaps of greater concern around market access is the lack of awareness about biosimilars and ongoing safety concerns in the healthcare community. A recent survey by Napp found one in five healthcare professionals in the NHS do not understand what biosimilars are and 80% said they needed further support and education on copycat biologics and their place in therapy. Tsang also notes that HCPs are not familiar with the regulatory landscape for biosimilars and that lack of awareness may impact adoption.

“Survey after survey has shown a lack of knowledge about biosimilars among providers, patients, pharmacists and even payers, highlighting the fact that this is a new market that will require advertising, public awareness campaigns and detailing in order to grow,” says Serebrov. Paul Greenland, vice president biologics at Hospira agrees: “We definitely need to raise awareness of biosimilars in the UK and the rest of the world. As more biosimilars become available and there is increased experience of using them, this awareness and knowledge will naturally increase. But it is important for biosimilar manufacturers to invest in raising awareness and driving the education of key stakeholders.”

There is certainly considerable potential in the biosimilars marketplace but if companies are to succeed they need to be properly forearmed. “The biosimilar market is highly complex,” says Nick. “Those who understand this market, or are partnering with those with the right expertise, stand to profit. But those not properly aligning themselves will lose out.”

* The EMA and FDA both require biosimilars to demonstrate a high level of comparability to the reference product as well as quality, efficacy and safety

* Both agencies call for a step-wise approach, which generally requires analytical studies and at least one comparative PK/PD study, as well as immunogenicity studies, and post-market monitoring

* EU rules allow extrapolation for multiple indications, and leaves interchangeability – substitution of the reference product without needing permission from the prescribing doctor – up to individual member states

* The EMA issues guidelines specific to the various classes of biologics

* The revised Guideline of Similar Biological Medicinal Products comes into effect in the EU on 30 April, which allows for use of a non-EU approved reference product for some studies

* The FDA also allows for extrapolation for multiple indications, and allows for separate approvals as a biosimilar and as an interchangeable biologic, which, in the USA, is treated as a distinct group of follow-ons – although guidelines have not been finalised yet

* There is evidence of growing harmonisation between the US and European systems. The European system was in place first, but the USA learned from the European experience and now Europe is revising its system in response to the same issues.

This article was published in the April issue of PharmaTimes Magazine. You can read the full magazine here.