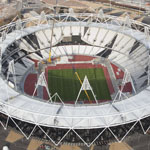 GlaxoSmithKline has unveiled the anti-doping laboratory which will be used to help catch drug cheats at the London 2012 Olympic and Paralympic Games.

The facility, based in Harlow, Essex, will see experts analyse over 6250 samples, or up to 400 each day, which is more than at any other Games. The laboratory, which measures the size of seven tennis courts, will be in operation 24 hours a day, seven days a week and over 1,000 Games staff, most volunteers, will work there this summer.

A team of more than 150 anti-doping scientists will carry out the testing at the laboratory, led by David Cowan from the Drug Control Centre at King’s College London. He said "we have developed, with GSK support, super-fast and super-sensitive technologies to be able to detect use of prohibited substances". Up to one in two athletes will be analysed, including every medallist, and the shortest test turnaround time will be 24 hours.

Sir Andrew Witty, GSK's chief executive, said the company "is well-placed to help deliver the scale and cutting edge technology required to run an operation like the anti-doping facility for London 2012". He added that "we have worked with King’s to put systems in place to enable this laboratory to test more samples than any previous Games and at the same time developing a blueprint for doping operations at future Games.’

In July last year, GSK signed an agreement with the World Anti-Doping Agency to share information about its medicines in development, specifically to identify substances with a probable or high risk of abuse in sport.