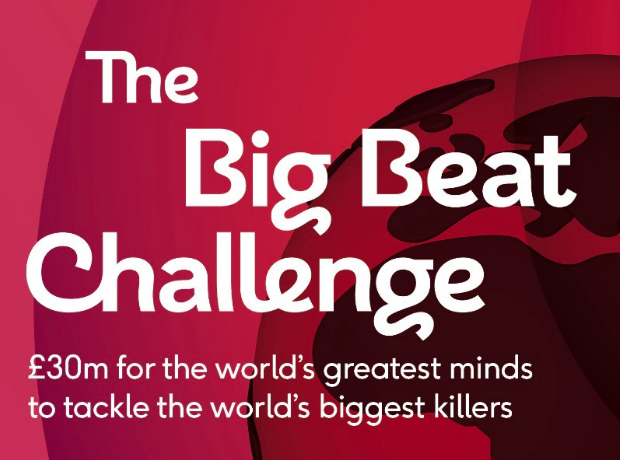 The British Heart Foundation’s “Big Beat Challenge” has revealed its four finalists, which will now compete to win a £30 million funding award.

The organisation whittled 75 complex applications, featuring team members from 40 countries, down to the four final entries, including a soft robotic heart and a “google map” of atherosclerosis to find and develop heart attack immunotherapies.

The charity says that the competition is one of many “radical new approaches” needed to address a “frightening mismatch” in research funding, compared with the burden of heart and circulatory diseases.

The remaining four teams will receive a small amount of seed funding – around £50,000 each - to further their innovative projects, and an ultimate winner is expected to be announced at the end of 2020.

Jolanda Kluin, professor of translational cardiothoracic surgery at the University of Amsterdam has submitted her plan to create a solution for heart failure by developing a hybrid heart, consisting of a soft robotic shell that forms the soft artificial muscles and sensors to enable natural motion. She says that it will also feature a tissue-engineered lining to make sure all the surfaces in contact with blood are safe.

Another team, led by Professor Ziad Mallat, BHF chair of cardiovascular medicine at the University of Cambridge, announced plans to use “cutting-edge technologies” to build the first 3D “google map” of human atherosclerosis. The deep mapping work will supposedly reveal new targets for immunotherapy to combat atherosclerosis, with hopes to lead to a new wave of medicines and vaccines that can prevent heart attacks and strokes.

A third research team is aiming to develop wearable technology that can be used in daily life to “capture more data than ever before.” The gadget will allegedly capture everything from symptoms and physical activity to heart function and air quality, information that could be used alongside genetic and healthcare data to transform diagnosis. Led by Professor Frank Rademakers, chief medical technology officer at University Hospitals Leuven, the technology will monitor and help develop treatment of heart and circulatory diseases through the creation of a digital twin.

Finally, researchers led by Professor Hugh Watkins, Radcliffe professor of medicine at the University of Oxford have revealed plans to develop a treatment that targets and silences the faulty genes responsible for cardiomyopathies – diseases of the heart muscle that can lead to sudden death or heart failure at an early age. The team says that it aims to stop the progressive damage caused by genetic heart muscle diseases, and even stop it before it starts.

After the six months of application development are over, an International Advisory Panel will review the teams and decide which proposal has the most promising chance of delivering a “revolutionary advance towards better cardiovascular health.”

The British Heart Foundation reminded that it is “taking small steps forward every year”, but Professor Sir Nilesh Samani, medical director urged: “What’s needed is a giant leap, which won’t be achieved by a business-as-usual approach. The Big Beat Challenge embodies our ambition to turbo-charge progress and could lead to its own ‘man on the moon’ moment. I have absolutely no doubt the winning idea will define the decade in their area.”

In November last year the foundation announced that a new “tweak” to the classic blood test could help detect heart failure. It announced that the proposed improvement could “cut costs and save patients avoidable trips to their GP”, after over a six-month period, an audit found unnecessary tests cost just one small area of the hospital around £1,600.