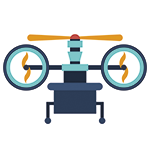 The possibilities for drones are endless. From aerial surveillance in warzones, to the delivery of pizzas, emergency medical supplies for car accidents, or medicines and aid to disaster areas where roads are blocked, these miniature, unmanned helicopters have the potential  to supply high-speed delivery anywhere in the world. Amazon is already looking at the possibility of using drones to deliver packages, while Google is currently testing its drones in the Australian outback. Perhaps not surprisingly, the industry is forecast to be worth $5.4 billion within the next decade.

Healthcare test pilots are already underway. In 2014, the World Health Organization and the Bhutan Government collaborated with drone developer Matternet to test how successful drones were in connecting the country’s main hospitals with rural communities. There is now a roll-out planned for 2015. DHL has also been involved with testing the use of drones in delivering drugs to the Island of Juist in the North Sea. Meanwhile, in Papua New Guinea, Médecins Sans Frontières and Matternet have joined forces to deliver saliva samples to laboratories for tuberculosis testing and diagnosis, overcoming the issue of patient access to labs in the country. And in the Netherlands, a prototype ambulance drone equipped with a defibrillator for heart attack incidents suggests this could dramatically increase survival rates.

The advantages are clear. Drones are potentially cheaper than traditional forms of transport, can offer faster delivery, and would require less support, particularly if delivery points and schedules could be pre-programmed, and if the drone was connected to a smartphone app. Besides saving lives by supplying access to medicines in hard-to-reach places, drones could be used closer to home, for example in home delivery of medicines and ferrying lab samples. In short, drones could form part of the humanitarian response or even be an extension of telemedicine.

There are of course obstacles. “Reliability is by far the biggest issue,” says Alec Momont, project lead for ‘the ambulance drone’, which is particularly pertinent if a drone is carrying a contagious biologic sample. “But once the technology is proven to be reliable, the regulations will follow.” Scalability is also a problem, adds Dr Arthur Richards, deputy director at the Bristol Robotics Lab. “It’s easy enough to have one or two drones operating in very sparse areas, but the technology to have large fleets interacting in cities is much further off. You’d need to develop a whole new infrastructure for flying.” The weight the drones could carry, how they might operate in adverse weather conditions and the current price tag (which can be several thousand pounds per vehicle) are three other concerns.

When can we expect the first healthcare drones? Initially, the likely focus will be on developing countries and humanitarian aid first, though Momont expects a timeline of at least a decade before drone technology will be fully applied to healthcare in Western countries.

This article appeared in the March issue of PharmaTimes Magazine. You can read the full issue here.

SMARTTECH: Rise of robots in healthcare
SMARTTECH: Sniffing out disease will be the future
Tweets by @PharmaTimes