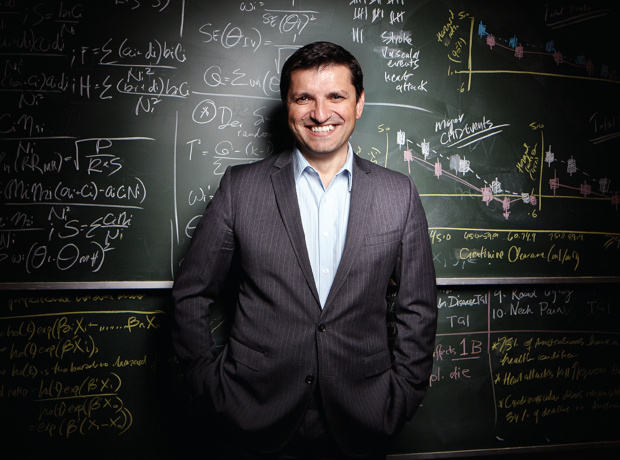 Dr Vlado Perkovic is lead investigator of Novo Nordisk’s trial, FLOW, the first dedicated renal outcomes trial of a GLP1 agonist in patients with type II diabetes. FLOW is a global trial that will investigate Novo Nordisk’s glucagon-like peptide 1 receptor agonist (GLP1 RA), once-weekly semaglutide. He talks to PharmaTimes about his hopes for the trial, and the need to tackle the growing burden of chronic kidney disease (CKD) in this population.

How common is chronic kidney disease (CKD) in people with type II diabetes?

Chronic kidney disease (CKD) is common in the general population, about one in 10 adults in most countries have it, but in people with diabetes, it is even more common. Most data suggest between 30-40% of people with type II diabetes will have some manifestation of CKD.

Is its prevalence on the rise in this patient population, and why does it represent such a significant global burden?

Kidney disease is also driving up the number of people who develop kidney failure as a result and need dialysis or a kidney transplant just to stay alive. It also means treatment for many hours each week. Feeling generally unwell with reduced energy and an overall poor quality of life is a common accompaniment of kidney failure. Equally, the costs of treating someone with kidney failure are extremely high in most countries. We are talking about many tens of thousands of dollars or even $100,000 per year, just to keep one person with kidney failure alive on dialysis.

These societal and financial costs are continuing to grow dramatically at the moment, and we need a way to address that.

Why are people with diabetes at risk of developing CKD, and what can they do to mitigate this risk?

Firstly, elevations in blood glucose typical of diabetes cause kidney disease and can cause kidney failure, and I think that is the fundamental issue. People with diabetes have a higher frequency of having other complications that may increase the risk of kidney disease, particularly conditions like high blood pressure.

I think one key element is to avoid getting diabetes in the first place, by trying to reduce the risk of being overweight, by exercising and eating healthily. For people with diabetes, trying to alter their diet, lose weight, exercise more and reduce their salt intake becomes even more important.

Controlling glucose is also important and we are learning that different types of glucose-lowering medications have different effects on the kidney. We recently learned that sodium glucose transporters (SGLTs) have kidney protective effects whereas other classes such as the DPP-4 inhibitors do not, so understanding the effects of individual classes of drugs as well as the overall target becomes very important.

How might once-weekly semaglutide help manage CKD in people with type II diabetes?

Semaglutide is a very promising treatment for people with diabetes and kidney disease. The existing data suggest it has substantial beneficial effects on the risk of cardiovascular events and this is an area of great need for people with kidney disease. These are the people who need protective treatments the most, so we see a potential role for this drug in helping those particular patients.

Can you tell us about the positive CKD signals observed with liraglutide in the LEADER clinical trial and with once-weekly semaglutide in the SUSTAIN 6 trial?

In data from the completed cardiovascular trials, we see that these drugs lower albuminuria substantially, which is a marker of kidney damage. In fact, the effects of semaglutide appear significantly more potent, with almost twice as much lowering of albuminuria than seen with liraglutide, suggesting it might be a particularly important kidney protective drug. We also see slowing in the rate of loss of kidney function, suggesting that there may be major kidney benefits

This data has paved the way for the Phase III FLOW trial – can you tell us more about this study, its key endpoint, and what you hope it will achieve?

The FLOW trial is designed specifically to test the effects of semaglutide on kidney outcomes such as kidney failure in people who have diabetes, and who have evidence of kidney damage through various combinations of reduced kidney function and increased albuminuria.

We are asking the question, ‘does semaglutide reduce the risk of the kidney failure and the things that matter to the patients: a composite of developing kidney failure, dialysis, transplantation, and losing at least half of kidney function, or death because of kidney disease or of cardiovascular disease’. This is the primary outcome in the FLOW trial, which we will test rigorously.

Aside from the primary endpoint, what do you see as the key secondary outcome measures and why?

Why is it so important to have a dedicated renal outcomes trial rather than as a secondary endpoint?

The secondary endpoints provide important supportive evidence, but they do not fully answer the question. The question of potential renal benefit needs to be addressed specifically. Hence, this is the only trial that is specifically designed to look at the effects of a GLP1 RA on kidney failure in people with type II diabetes. It is also important because there is evidence to suggest that the benefits may differ by level of kidney function, as we have seen with other drugs.

As this is the first ever trial of the GLP1 agonist designed to test the effects of a drug in this class on both kidney outcomes, as well as cardiovascular outcomes, in a population that already has kidney disease, it's going to be extremely important to understand whether semaglutide does lead to better outcomes in this population at highest risk.

When do you expect the trial to start, for how long will it run, and when can we expect the first results?

The trial is in start-up phase now and we expect the first patients to be recruited by July 2019. We will then be working very hard to recruit a large number of people from other countries around the world, from about 400 sites. The trial will recruit over the next couple of years and we expect the trial to run for about four to five years, dependent on how quickly we accrue the events that we expect to see.

What is the future goal for the treatment of CKD in people with type II diabetes?

The available data suggest semaglutide is the most promising new glucose lowering treatment for people with diabetes and kidney disease.

Along with the FLOW trial, there are many other clinical trials that are under way at the moment. We have for the first time real hope for people with diabetes and kidney disease. In the past, someone with diabetes and kidney disease faced an uncertain future with very real prospect of needing dialysis. I would also hope, at a population level, that we could turn around this inexorable increase in the number of people developing kidney failure and reduce the need for dialysis at a societal level as well.

I think with treatments that are becoming available and are successful, we will completely change the prognosis for these people. Protecting them from kidney failure, but also from some of the associated cardiovascular complications and help them to lead a healthier and longer life.