The UK once lagged behind other European Union countries on the use of biosimilars, recording just 44% uptake for the first biosimilars etanercept (Enbrel) and infliximab (Remicade) in the year following their launch in 2016. There followed evidence of ‘significant and unwarranted’ variation across the country in access to these medicines, as detailed in the NHS’ Biosimilars Uptake Report 2018.

However, the UK now finds itself a leading user, with between 86%-90% uptake of biosimilar versions of top-selling biologics such as rituximab (MabThera) and trastuzumab (Herceptin). This is largely due to the prominent role that the National Health Service (NHS) is playing in encouraging their adoption. So, what has changed and what can we learn from this evolving landscape?

Biosimilars gained momentum in the UK following the market launch of biosimilar versions of leading medicines such as infliximab, etanercept, rituximab, pegfilgrastim (Neulasta) and trastuzumab. In 2017/18, the NHS garnered savings of more than £200 million by switching to biosimilar medicines, and the organisation has set itself a goal of saving up to £300 million a year by 2021. This target has become more achievable with the first approvals of biosimilar adalimumab in October 2018; the originator, Abbott’s Humira, remains the top selling drug in the world with annual sales of around $20 billion. The NHS spends more than £500 million a year on adalimumab, which is used to treat a variety of conditions such as rheumatoid arthritis, Crohn’s disease and uveitis, and thus availability of a cheaper, biosimilar form of the drug presents a huge savings potential.

Technology Assessment: In most cases, biosimilars approved by the European Medicines Agency (EMA) are not appraised by UK Health Technology Assessment (HTA) bodies (Table one) and automatically receive the same level of reimbursement as the reference medicine, provided that they are less expensive. In 2017, NHS England introduced Regional Medicines Optimisation Committees (RMOCs) to address medicine optimisation issues where a national steer would be beneficial to the system. Part of its work is to produce recommendations on new medicines – such as biosimilars – that are not subject to the NICE HTA, to help drive their uptake. 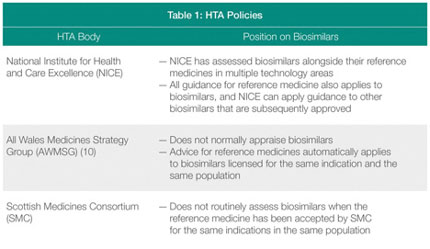 NHS Commissioning Framework: The NHS has been proactive in promoting biosimilars, having stated that they are suitable for new and existing patients, and that treatment decisions should be made first on the basis of clinical judgment for the individual patient and secondly on the overall value proposition offered by medicines. If more than one treatment is suitable, the best value biological medicine should be chosen.

The NHS aims to have at least 90% of new patients prescribed the best-value biological medicine within three months of a biosimilar’s launch and at least 80% of existing patients within 12 months or sooner.

Across markets, the primary motivator for adopting biosimilars is the savings over the cost of their reference products. Yet, as highlighted by the NHS’ Biosimilars Uptake Report 2018, ‘a simple price discount does not lead to market penetration’. There remain impediments such as concerns over efficacy, safety and tolerability, prohibitions against automatic, pharmacy-level substitution, and lack of awareness among patients as well as, in some cases, physicians.

NHS England has identified a number of obstacles to switching, including: missing financial incentives for providers and lack of agreement over a switching strategy; lack of staff resources or time, different levels of engagement by different specialties; and supply chain issues.

To address these issues and support ‘best-value prescribing’, the UK has adopted:

*An extensive engagement strategy. This includes materials for patients to support them in their medication choice, data packs for each region, regional Web-Exs, and publishing performance information

*Incentives for providers. NHS is open to using appropriate financial arrangements, such as gainshare agreements, to incentivise providers in early adoption

*Regional coordination and support. The NHS believes that patients, prescribers, care providers, commissioners and oversight bodies must collaborate to realise the savings from biosimilars. The four RMOCs are to provide advice on the optimal use of medicines to reduce variation across the country

NHS Improvement is also supporting the increased uptake of biosimilar medicines its Top Ten Medicines Dashboard (launched in July 2017), which enables NHS acute trusts to review their potential savings opportunities for an initial group of ten drugs, three of which are biosimilar products.

Originator companies have three basic options for defending against biosimilar competition, each of which suggests a counter biosimilar strategy (see Table 2). 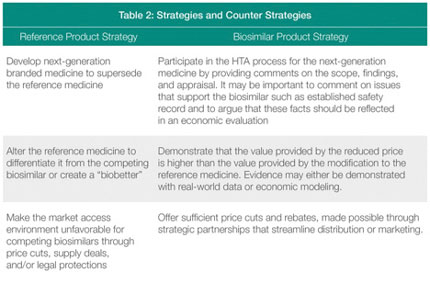 Norway and Denmark, where the uptake of biosimilars has surpassed 80% of the market, serve as resources for lessons learned. Highlights of their experience include:

*No unexpected issues have been discovered after more than a decade

*Uptake is stimulated by the drug authority’s support for switching, strong financial incentives for providers, strong management involvement in purchase and delivery agreements, and multi-stakeholder engagement and transparency; and

*One national tender where the winner takes all yields a better cost reduction than negotiations with the original manufacturer.

In the UK, the Medicines and Healthcare products Regulatory Agency (MHRA) has not published its position on interchangeability, nor is automatic substitution of a biosimilar for an originator permitted. Also, NHS tenders are coordinated nationally with the resultant frameworks delivered to four regions. There is a national framework tender for adalimumab with the aim of awarding access (not necessarily sales) in 11 regions in England.

To promote biosimilar adoption further, the UK will need to optimise clinical, utilisation and cost data collection. There is also a clear need to educate stakeholders and promote success stories, as well as foster collaboration among stakeholders at the national and regional levels and monitor Clinical Commissioning Groups’ performance on driving uptake.

As biosimilars expand the market, existing health policies and initiatives will need to be tailored by therapeutic area to ensure sustainability and a favourable budget impact.