Silver linings and striving for gold

Jenny Ousbey, founder of OVID Health, on raising the bar for patient-centricity

In the 1600s the poet John Milton wrote a poem about a cloud. Comus portrays a cloud turning her ‘silver lining on the night’.

Many column inches have been dedicated to discussing what the ‘silver linings’ of the pandemic have been. In amongst the complete and utter devastation of COVID-19, there have been chinks of light which the healthcare world would dearly love to keep on shining.

Virtual GP consultations for those that need (and want) it, innovative mental health programmes, accelerated digitisation, embedded flexible working and a greater sense of partnership working are just some of those silver linings the NHS wants to keep.

We are only at the start of understanding and processing what the future can and should look like for patients. But there are good reasons to be hopeful.

My communications agency OVID Health created the concept of the Patient Partnership Index pre-pandemic. We wanted to launch an initiative which celebrated the great work being carried out by companies to partner with patient organisations in communications and advocacy. But we also wanted the Index to play a more fundamental and lasting role. Over the years I’ve seen fantastically impactful programmes, projects and campaigns launched and delivered. But I’ve also been frustrated by the lack of creativity, the ‘last minute-ness’ of some strategic partnerships and the highly transactional nature of some projects too.

Which is why the Index is designed for a life outside of the announcement of which companies have reached Gold, Silver or Finalist standard. This is because the Index exists to share best practice far and wide to raise the bar for everyone – most crucially for patients. We want it to serve as a catalyst for an increasing amount of integrated communications campaigns and projects which place patients at their heart.

As chair of the judging panel, alongside senior leaders from the pharmaceutical industry and patient communities, I wanted to share some of my key insights into what makes a good patient partnership.

First and foremost, a real indicator of the effectiveness and quality of patient partnership working in a company is how embedded the relationships are at different levels. It is no coincidence that all of the Gold standard companies have responsibility and involvement in patient advocacy at the highest levels of their businesses. In my experience this can be cemented by working across business functions to make a ‘patient promise’ plan of action on how to embed patient-centricity.

With trust in the UK pharmaceutical industry at 67% (a 20% rise on last year), it is clear the public (and therefore patients) want to see the sector collaborate with others and to demonstrate a willingness to help, not only in efforts to defeat COVID-19 but in other areas too.

The judges were therefore delighted to read multiple examples of companies acting rapidly to provide value and support to their patient communities during lockdown.

For example, Gilead’s nimbleness in response to the pandemic led to them to convert their existing online HIV Age Positively campaign into the HIV Collective to reflect the coming together of organisations with a common purpose: COVID-19. Through this, initiatives were developed with patient organisations, including the development of content capsules to support the broader HIV community with reliable information about the virus.

The best patient pharma partnerships are often where companies are adaptive and nimble. They must always deliver on compliance and governance. While this process doesn’t need to be complicated, it does require genuine investment and transparency from both parties.

Pfizer’s approach, as well as listening to the feedback from patient organisations, is to assess the impact of its partnerships through anonymous feedback from independent research agencies. It also measures external impact through adoption and continuity of projects and initiatives in the wider community, such as through its work in raising awareness of sepsis and antimicrobial resistance.

I’ve written before (and said during countless coffees and virtual meeting calls) that if we want to demonstrate how good quality patient-centric communications work can deliver on commercial objectives then measurement is vital. Unlocking the door to greater support and resources internally for impactful campaigns or projects means companies getting better at measuring a series of metrics in their work.

Although some companies are beginning this journey, I’ve seen some great examples of how this can be done effectively, such as staff surveys, requesting anonymous feedback from patient groups and identifying patient community skills or information gaps. It’s also vital to measure the impact of the end result.

An impressive example of this is Sanofi and Allergy UK’s Scratching Beneath The Surface campaign which raised public awareness of the burden of severe eczema. The campaign was based on the results of a patient survey and insights on the challenges faced by patients affected by atopic dermatitis. The launch event used skin mapping technology to project the disease onto the human body and ultimately reached an online audience of close to 3.5 million.

But sometimes you only need to reach a relatively small group of people to make a huge difference. And if you do it with flair through innovative channels then all the better for achieving your goals. As judges we loved hearing about how Gilead’s work with drag queen Panti Bliss (HIV activist Rory O’Neill) helped to reach gay and bisexual men who typically do not engage with patient groups.

I’m strongly of the view that creativity is a necessity if you want your message to get noticed in a hugely crowded environment, but it should never feel like hard work. If innovation comes naturally then you know you’re onto a winner.

A great example of this is Janssen and Crohn’s & Colitis UK’s partnership on the Not Every Disability is Visible campaign. Four years ago, Crohn’s & Colitis UK embarked on a mission to put new accessible toilet signage in UK supermarkets. With support from Janssen, it’s now a widely recognisable campaign which has built momentum over time and resulted in genuine change and value for people with ‘invisible’ diseases.

Lastly, being authentic to your brand, to your mission and your patient communities produces commercial success. Take the Black Lives Matter movement. Hundreds of companies around the world who previously had no involvement or had ever commented publicly on this topic suddenly came to the fore. We know from this that only genuine corporate commitment to anti-racism was respected by the public – and the same applies to generating effective patient partnerships.

So, before you embark on the next communications or influencing campaign – to improve the lives of the patients your treatments and medicines help and to raise awareness of your company – you should ask yourself five simple questions:

1. Are we addressing a genuine need for patients?
2. Are we planning on doing something authentic to who we are as a company?
3. How are we going to measure success?
4. Who is going to lead this internally, and do we have buy-in across the company?
5. Do we have a transparent relationship founded in trust with the patient organisation we hope to partner with?

Over the past six months the success of the Index has taken on even greater significance – having been launched at a crucial moment for the pharmaceutical sector, the response to the Index from both industry and patient organisations has been fantastic.

So, despite the global challenges ahead I feel optimistic about the silver linings we can nurture. We have an opportunity to reinvent new partnerships and to revisit existing ones to make them work harder than ever. With communications and campaigns increasingly in the spotlight, there is pressure to get it right, But the mistrust that may have been there in the past is starting to evaporate thanks in no small part to the extraordinary dedication and achievements of the pharma industry working together with patient communities.

As Damon Jones, chief communications officer for Proctor and Gamble put it so eloquently recently: “We make no apologies that doing the right thing for society is, in fact, the thing to do for business.”

The Patient Partnership Index - what the judges said:

It was really heartening to see the great work already underway to build and maintain two-way bridges between pharma and patients. Trailblazers in the patient-centricity landscape are paving the way for others to follow suit, and it is our intention that the Patient Partnership Index will highlight this best practice and provide a meaningful platform for improvement. This year’s entrants are clearly at various stages of the patient partnership journey, but all had in common the desire the ensure that the patient voice is heard across operations, with the ultimate aim of improving treatment outcomes. Key to ensuring lasting and successful partnerships is company-wide recognition of the importance of such relationships, co-creation of projects with partners, gathering and acting on feedback, and a large dash of creativity.

I was really pleased to read about the efforts and commitment that companies are making in their collaborations with patients, in particular in listening and responding to the patient perspective from the start. Many companies had moved beyond one-off transactional activities to fully embedding a patient-centric approach across their organisations, and the quality of entries was high. There were some good examples of how leadership teams are driving a successful culture of ethical collaboration, helping to build skills in patient organisations but at the same time mindful of the need to ensure independence. The scale and complexity of pharma companies can be a challenge for smaller patient organisations to navigate, so it was good to see some organisations taking steps to make processes easier. However, one of the areas where many companies struggled was in establishing a range of metrics and quantifying the impact of their collaborations; more attention on building this in as programmes are set up would help to demonstrate value and keep a focus on goals.

Companies that excel at patient partnership work involve charities and patient representatives at the earliest stages so that projects and campaigns can be co-created and co-designed. Relationships are often multi-year so that there is good understanding of the needs and challenges faced by both partners. Buy-in from senior staff is important and pharmaceutical companies who are committed to improving their patient partnership work tend to involve staff across the organisation. They will have invested in positive processes and procedures which protects not only them but also the patient organisations. They have a culture where the voice and participation of the patient is valued and seen as an essential ingredient. I was pleasantly surprised when reading the Index entries as to how many organisations have built constructive, positive relationships with patient organisations that are long term, mutually beneficial and genuinely place the patient at the heart. 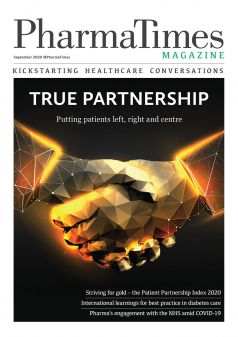 Read this article in the September 2020 Digital Edition