After an eventful year, what’s next for the UK’s life sciences sector? Dr Kath MacKay looks into three areas for development in the years ahead

The life sciences industry is one of the hardest to forecast at the moment. Two themes – the speed at which new vaccines for COVID-19 were developed and improvements in artificial intelligence (AI) – surpassed all expert expectations last year, and there will likely be further significant scientific achievements seen in 2021.

I won’t try to predict exactly what’s in store for the industry this year and beyond, but there is no doubt that we will see many interesting breakthroughs and scientific developments that have the potential to change lives on an equally profound scale.

The beginning of the end for malaria

Oxford University Jenner Institute’s long-running research into a malaria vaccine will prove to be one of 2021’s major milestones. Preclinical development has led to significant breakthroughs in the field of vectored vaccines for malaria, a disease that kills more than half a million people a year, mostly in sub-Saharan Africa. Two-thirds of its victims are children under five from some of the most impoverished countries in the world.

The World Health Organisation (WHO) estimates that around half of the world’s population is susceptible to the disease and while significant progress to both limit its transmission and treat it has been made in the past two decades eradicating malaria has been an uphill battle, with a lack of funds and access to life-saving interventions exacerbating the threat to life.

As the Jenner Institute’s research programme progresses, efforts to eliminate the disease move one step closer. Following promising early trials, the team is entering the final stage of human trials in the hope of producing a cheap and effective vaccine for malaria. This follows the large-scale pilot programme of the RTS,S vaccine coordinated by the WHO – currently the first, and to date the only, vaccine that has demonstrated it can significantly reduce malaria and life-threatening severe cases in young African children.

The Jenner Institute’s vaccine trials are the result of 20 years of research and development, and a watershed moment for the UK’s scientific community. Professor Adrian Hill, director of the Institute, has stated that if trials are successful he anticipates the vaccine could be in use no later than 2024. Available at a low cost and in large quantities, it can be rolled out quickly across the most heavily affected areas of sub-Saharan Africa. The achievement should help to bring an end of a public health emergency that has ravaged some of the globe’s poorest countries for generations.

The commercial appeal of science

The news that UK ministers are in talks with a United Arab Emirates sovereign wealth fund to back a new national investment programme for life sciences start-ups highlights the sector’s increasing commercial appeal.

It also demonstrates the desire of governments to position their nations as leaders in the field for the economic benefits it brings. This is only set to continue as global powers look to invest in specialist research and development to shore up against the risk of potential future public health emergencies, such as a new SARS pandemic or growing antibiotic resistance.

The property market is a good barometer for the appetite of investors, and demand for specialist spaces such as labs is the highest it’s been for a long time.

It’s possible that in the same way venture capital and major institutional investors have been chasing the next tech unicorn, life sciences is likely to become the next sector that money flows to. And while the more specific innovations pursued in our field mean that start-ups in life sciences might lack the immediate scale-up opportunities that tech can serve up in the global consumer markets, its appeal is still great for investors and we’ll no doubt see more headlines over the coming months around significant public and private investment.

While the application of quantum computing in life sciences will remain in its infancy this year, as AI continues to develop we’ll increasingly learn more about its potential.

In the field of medical imaging, the potential application for quantum-powered analysis is really exciting. Areas of medicine like pathology remain very analogue – a biopsy is taken, processed and stored on a slide for viewing under a microscope. Digitising this process creates large files that demand substantial computer power to process and analyse.

But that digitisation is fast gathering pace and is quickly creating libraries of data for sophisticated AI or quantum-driven programmes to analyse in ways that we cannot yet fully comprehend.

AI has shown us the potential for using healthcare data in a way that is quicker and more efficient. This is leading to new breakthroughs. The power of quantum can help computers perform faster processing and handle more complex problems, even beyond the realms of the likes of DeepMind. That means we can build on and improve upon the breakthroughs AI’s programmes make.

A parallel trend has been the growing dominance of healthcare data in life sciences. In the UK, the beauty of having a universal healthcare system is its ability to track and store vast swathes of information about the population that can be accessed and used by researchers. This is becoming ever more sophisticated.

Meanwhile, the proliferation of personal technology that captures individual data and the acceleration of digital transformation in delivering healthcare services, means we will have ever more data points at our fingertips. It means tracking AI’s developments over the coming years for an idea of the potential that quantum computing has. It’s not here yet, but at some point its impact will be huge.

The global economy and the industries that support it have gone through a once in a generation event that will change their complexion for years to come. But – perhaps more so any other industry – life sciences has proven its value and the wider benefits it brings. 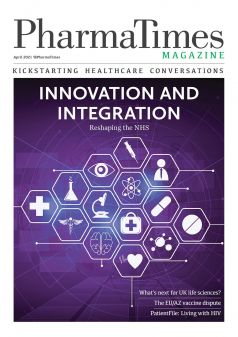