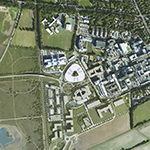 Having fended off Pfizer’s advances, at least for now, AstraZeneca has unveiled the designs for its new global R&D centre and corporate headquarters in Cambridge.

The £330 million new facility has been designed by Herzog & De Meuron, the architects best-known for Tate Modern and the Olympics Stadium in Beijing, and is on Cambridge’s Biomedical Campus. The drugmaker says that the high technology labs on the site will be separated from other work spaces by glass walls to promote “visible science” and will feature a number of open spaces and thoroughfares. These are designed to “encourage collaboration not only within AstraZeneca, but also with the wider scientific community” on the campus and beyond.

Noting the environmentally-friendly virtues of the site, AstraZeneca said “the unique characteristics of Cambridge’s historic centre have influenced the shape of the buildings”. It will be low rise and include a central courtyard reflecting the colleges of Cambridge University.

Mene Pangalos, head of innovative medicines and early development, said the aim is to create “an open, welcoming and vibrant centre that will inspire our teams and partners to push the boundaries of scientific innovation”. It will bring together AstraZeneca’s small molecules teams and biologics research of its MedImmune unit.

In advance of the new site coming online in late 2016, by the end of this year, some 300-400 AstraZeneca staff will have relocated to the city. The designs were unveiled as part of a public consultation, ahead of submission of a detailed planning application in autumn. The company expects to begin building in early 2015.