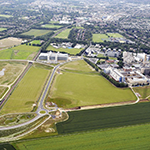 AstraZeneca has confirmed that it will build a global R&D centre and new corporate headquarters at the Cambridge Biomedical Campus in the UK city.

Some three months ago, the Anglo-Swedish drugmaker said it would be investing £330 million into a facility in Cambridge as part of its move to create strategic global R&D centres in the UK, the USA and Sweden to improve pipeline productivity and to establish the firm as a leader in innovation. It has plumped for the aforementioned campus, which is home to organisations including the University of Cambridge School of Clinical Medicine, Addenbrooke’s Hospital and the Cancer Research UK Cambridge Institute.

The facility will occupy 11 acres of the 70 acre campus (pictured), "which benefits from a central Cambridge location and strong infrastructure links", AstraZeneca said. By 2016, the new site will house "a highly-skilled workforce" of about 2,000.

Chief executive Pascal Soriot said that “Cambridge competes on the global stage as a respected innovation hub for life sciences and our choice of site puts us at the heart of this important ecosystem, providing valuable collaboration opportunities". He added that moving to the Cambridge Biomedical Campus "means our people will be able to rub shoulders with some of the world’s best scientists and clinicians carrying out some of the world’s leading research".

The move to Cambridge comes as AstraZeneca gets to work on running down its Alderley Park centre in Cheshire, where R&D operations will cease over the next three years. The plan is that some 1,600 staff will relocate to Cambridge but 700 jobs are being cut.

Bad news then for the north-west of England but David Willetts, minister for universities and science, said that AstraZeneca’s investment in Cambridge "is excellent news for the UK life sciences industry. It strengthens our global competitiveness and supports our aim of making the UK the best place in the world for the discovery and commercialisation of medical innovations".

Sir Leszek Borysiewicz, vice chancellor of the University of Cambridge, noted that "over 1,500 companies in the Cambridge cluster of high-tech industries have found that proximity - to the university, to our NHS partners and to each other - enables productive relationships and stimulates competition". He added that "as a global player, AstraZeneca will add tremendously to that environment".