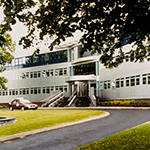 AstraZeneca has sold its huge Alderley Park site to Manchester Science Parks, securing jobs and offering the opportunity for many more.

There has been much concern in the north of England about the plant ever since AstraZeneca said last March it would establish new global R&D centre and corporate headquarters in Cambridge in 2016. Now thanks to MSP, majority owned by the property developer Bruntwood and backed by Manchesters two universities and Manchester and Salford city councils, the 400 acre site will remain a life science and biotechnology campus.

Financial terms of the transaction are not disclosed but the Manchester Evening News reports rumours that Bruntwood beat off competition from Palmer Capital, Huntsmere and Telereal Trillium, with bids having ranged from £30-£50 million. AstraZeneca expects to complete the sale by end of this month and will remain a key tenant, with around 700 staff on the site in non-R&D roles following the transition to Cambridge.

Chief executive Pascal Soriot said the sale to MSP is "the responsible and sustainable choice for the future of Alderley Park. The new owner is committed to building on AstraZeneca’s life science legacy at the site and ensuring it remains a centre of biotechnology innovation in the north west of England". He added that "it will lead to future growth and offer significant opportunities for new jobs to be created.”

Chancellor of the Exchequer George Osborne, who is a local MP, said: “I am fighting hard for the future of this site…so I am very pleased that Alderley Park, with its rich heritage of innovation, will now continue to operate at the centre of the UK’s life sciences’ industry".

AstraZeneca will take pretax impairment charges of $275 million to non-core R&D expense in the first quarter of 2014, which forms part of "costs associated with the footprint changes" announced a year ago.