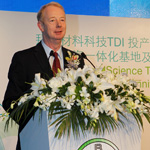 Bayer has laid out its plans to grow in Asia, most notably in China, saying it expects sales for the whole region to rise by more than 60% by 2015.

Chairman Marijn Dekkers, speaking at a press conference in Shanghai, said that this equates to sales of well over 11 billion euros, and of this figure, the Greater China region should account for around 6 billion euros. Last year in Asia, where the German group has spent 3.4 billion euros in capital expenditure over the past 10 years, sales reached 6.90 billion euros.

Dr Dekkers (pictured) noted that "we have been operating for more than a century in China, India and Japan". He added that "we are familiar with the markets, and we know how to tune our approaches to the different conditions".

He went to say that Bayer will also continue to invest in local R&D, especially in  diseases "that occur more frequently there than in other parts of the world – such as liver cancer". The company also wants to get more Asian patients into the early stages of clinical trials.

The Leverkusen-headquartered firm added that the number of employees in Asia could increase from 23,700 in 2010 to more than 30,000 by 2015, while capital expenditures of some 1.8 billion euros are also planned during this period.