BLOG: Reaching for air, a plea to MS researchers 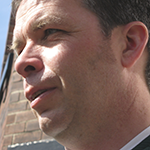 If you only have time for evidence-based information, maybe you are missing a trick. Perhaps narratives and blogs by patients present a confusing mist which serves only to distract you as the expert from getting at the truth.

Well here’s my story. at least as I see it today. If I was writing next week it would be a different story. Perhaps that is why narratives or blogs from patients are so unappealing to pharmaceutical research. A different story every day.

The ups and downs of multiple sclerosis even for those like me that seem to be going in only one direction, mean that there isn’t any one story but many. Of those stories, perhaps only one in 100 gets told because on the other days sleep can be such an appealing alternative to writing.

Abrupt end to academic life at 50

I should be a great believer in evidence-based research. Having been a professor in social sciences, things came to an abrupt end at the age of 50. Perhaps even then I had become increasingly unconvinced by the limitations of this ‘scientific’ worldview. Today, as a patient, the world of narratives has become so much more important.

Sharing anecdotes with other patients on the infusion ward, a sample of six -  far from being scientific, it’s so much richer than statistical data. There is a lot of banter on the ward about the cornucopia of different drugs that they have tried. Sometimes it’s like listening to children bewildered in a sweetie shop. But often the stories are so much richer, with all of us sharing our pains, anxieties, suspicions, and life experiences.

I’m feeding on steroids for the next five days. I know it won’t go on forever but it’s given me a few days to have my head above water - to breathe, to move out of this sleeping zombie state which has engulfed me for the last year.

So what is my drug history? Nearly three years on a disease-modifying drug involving monthly infusions. Three years in which I remained in doubt as to whether it was helping me or not. I wish I had a doppelgänger. One who had my same condition that had chosen to go along the drug-free path. Then I could find out what might have become of me.

Fear of going to sleep

When you are using a drug that offers stability or reduced rates of decline you are always asking that question; would I have slipped off the plate had I chosen another path? I stopped my disease-modifying drug three months ago. During my treatment I was experiencing very deep slumber which sometimes felt difficult to emerge from. Something which at times left me with a fear of going to sleep and not waking again. Was this the drug or just part of the MS deal?

Things have not gone well recently so perhaps I was being a maverick coming off the drug and jeopardising my ability to perform as a husband and father of young children. Anyway, I’m giving it another go. Back on the infusion ward next week.

I have access to the daily news with promises of emerging drugs and a plethora of statistical data but these leave me numb. Without a narrative all of the statistics fail to tell the full stories.

Maybe I’m just not a very good subject. I’m predisposed to be suspicious of the medical world, since the trials and tribulations of my mother who had MS treatment led to nothing. Added to this, having diagnosed my condition some 10 years before the GP it didn’t endear me to their know-how. Suggestions of ‘cyber-chondriac’ behaviour on my part and a preoccupation with my mother’s experience was seen as clouding my judgement.

But I’m no longer a cynic. I can’t afford to be a cynic and I will from now on place my trust in my consultant and MS nurse who have won me over with their robust advice and concern. Perhaps my experiment with going ‘commando’ without drugs was foolhardy - I just had to know a little bit more about my doppelgänger!

Anyway, the energy banks are running low now. This is it for today. Perhaps this is it for many days. But it’s been very precious to have this one, a day when I can raise my head above the surface of the water.

To conclude, people’s stories may not fit the evidence-based model and are vulnerable to bias and propaganda. It’s also difficult to trawl through this stuff. But there are many voices out there waiting to be heard if only the medical world could find the time to listen to them more carefully.