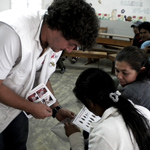 These activities are growing fast, and come as many traditional donors reduce or slow their spending, according to the study, which has been published ahead of the fourth annual BRICS Summit, to be held March 29 in New Delhi, India. Although G7 donors still provide far more total assistances, the average annual growth in the BRICS' foreign assistance spending between 2005 and 2010 was more than 10 times higher than that of the G7, notes the report, which is published by Global Health Strategies initiatives (GHSi).

"Over the last decade, the BRICS have begun to transition from aid-dependent to emerging global actors with significant geopolitical influence," said Dr Blessed Okole, senior general manager for infrastructure and planning at South Africa's Technology Innovation Agency. "With some donors facing financial challenges, the BRICS will play an increasingly important role in improving health in less-developed countries," he added.

David Gold, one of GHSi's co-founders, points out that just as important as the major new resources which the BRICS are contributing to global health and development efforts are the new models they are establishing for cooperation, which challenge the way we think about foreign assistance.

"With growing capacity for innovation and an emphasis on South-South partnership, the BRICS are delivering important new health interventions and technologies to developing countries," he said.

The report points to important contributions by the BRICS to multilateral health initiatives, including Brazil's role in founding UNITAID - which works to scale up access to treatment for HIV/AIDS, malaria and tuberculosis (TB), by leveraging price reductions for drugs and diagnostics and accelerating the pace of their availability - and Russia's role as a founding donor to the GAVI Alliance's Advanced Market Commitment on pneumococcal vaccines.

Major domestic developments include Brazil's landmark 1996 commitment to provide universal access to effective HIV treatment, which has significantly influenced global policies on access to medicines. Also, China has been a leader on malaria treatment in Africa, while South Africa is pioneering the introduction of new molecular diagnostics for TB.

Beyond providing assistance, the report also documents how public and private-sector innovators in the BRICS countries are producing high-quality, low-cost health technologies that have revolutionised health access among poor populations.

Indian manufacturers, for example, have played a critical role in driving down prices for vaccines and HIV/AIDS medications. While India is currently the largest producer of low-cost drugs and vaccines, each of the BRICS is investing heavily in science and technology, including health R&D. China has pledged to increase R&D expenditures from 1.3% of Gross Domestic Product (GDP) in 2005 to 2.5% of GDP by 2020, and the government is working with vaccine manufacturers to scale up production for global markets, while Russia has announced a $4 billion investment in pharmaceutical development.

The Summit will help generate greater momentum for collaboration in health and development, says the GHSi report; for example, India has been championing the creation of a BRICS Development Bank to formalise and coordinate assistance efforts. Other areas where the BRICS could coordinate their efforts include TB innovation, prevention and control of non-communicable diseases, polio eradication, disease surveillance and access to vaccines, it adds.