Charity warns of 'quite epidemic' of oesophageal cancer 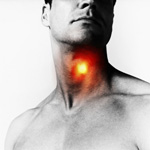 Men are three times more likely to get oesophageal cancer than women and cases of the disease are steadily on the rise, according to new data from Cancer Research UK.

Reflecting one of the biggest gender gaps in cancer rates, figures show that more than 5,600 men in the UK develop oesophageal cancer every year compared to 2,800 women.

The difference is largely being driven by a particular type of the cancer - adenocarcinoma - which is linked to obesity, tobacco, and long-term acid heartburn or indigestion, indicating that lifestyle factors have a signifiant role to play in the development of the disease.

Interestingly, neither sex has seen an increase in the other type of oesophageal cancer - squamous cell carcinoma, the risk for which is increased by tobacco, alcohol and a diet low in fruit - over the period.

Oesophageal cancer is the ninth most common cancer in the UK, and is notoriously difficult to detect, given that in many cases symptoms only arise in the more advanced stages. Consequently, only about 10% of patients are alive 10 years after diagnosis.

"Oesophageal cancer is on the rise, and sadly the outlook for this disease remains poor," said Rebecca Fitzgerald, a Cancer Research UK scientist at the University of Cambridge. "But we’re doing all we can to buck this trend" she said.

Early detection of the cancer greatly improves chances of surviving the disease, the charity said.

“Diagnosing the disease earlier is key to improving the chances of survival. Food getting stuck when you swallow and persistent heart burn are not normal. If this is happening to you, you need to see your GP," said Tim Underwood, an oesophageal surgeon and researcher at the University of Southampton.