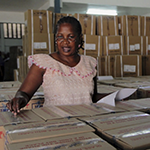 Coca-Cola and the Global Fund to Fight AIDS, Tuberculosis and Malaria have expanded a project which uses the beverages giant's "expansive global distribution system and core business expertise" to help deliver critical medicines to remote parts of the world, beginning in rural Africa.

The public-private partnership was established in 2010 to help Tanzania’s government-run medicine distribution network, Medical Stores Department, build a more efficient supply chain by using Coca-Cola’s "proven logistics models for delivering beverages most anywhere in the world". The latest phase of the partnership, developed in cooperation with the likes of the Bill & Melinda Gates Foundation, Accenture and Yale University, will increase the availability of critical medicines to 75% of Tanzania and expand the initiative to Ghana and Mozambique. Opportunities to move into additional countries are being explored.

The partners say that since 2010, the scheme has benefitted nearly 20 million people and reduced lead time for medicine deliveries to Tanzanian health facilities by as much as 25 days (from 30 to just five). Coca-Cola chief executive Muhtar Kent said the success of this project "demonstrates our belief in the power of civil society, government and the private sector working together to solve real global problems. It’s what we call the ‘golden triangle'." He added that the collaboration "uses our global business expertise to help solve critical logistical requirements for the delivery of medicines to reach the most remote parts of Africa".

Gabriel Jaramillo, general manager of the Global Fund, said that "supply chains in remote parts of the world often don’t work efficiently, and that can mean that deaths that should be prevented still occur". He added that "we noticed...Coca-Cola’s products always seemed to get to every remote regions and we thought that if they could get their product there, with their support, maybe we could too.”