Europe must pay its way for innovation: Novo chief 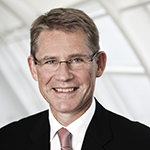 Novo Nordisk's chief executive Lars Rebien Sorensen has accused politicians in some European countries of making empty promises to their populations in terms of access to innovative drugs and called for more harmonisation of regulatory systems across the globe.

Speaking to PharmaTimes World News at an event in Copenhagen, Mr Sorensen (pictured) said that it could get to the stage where the Danish drugmaker could consider not launching in certain countries because while governments claim they want innovative drugs, they are not prepared to pay for them. He noted that the Old Continent has always paid less than the USA which has traditionally borne the brunt of financing innovative R&D, but regulators in the latter have become more risk-averse and there is less cash around to pay for ever-more-expensive trials.

Mr Sorenson believes that it is time for Europe to set up to the plate and  pay its way but it does not look promising. Governments "can't turn up the tax screw anymore", he said and some politicians have made "frivolous promises" to voters in terms of providing healthcare systems where innovation are valued.

He told PharmaTimes World News that Novo will decide on a country-by-country basis on whether it will launch new products or not in those territories. He also looked back at the problems the firm faced in Greece some three years ago when the government there "got into a pickle" and cut drug prices by 25%, prompting Novo to stop providing its modern insulins before a deal was reached.

As for the regulatory scenario, Novo suffered at the hands of the US Food and Drug Administration in February when the agency surprisingly rejected its diabetes treatment Tresiba (insulin degludec) and demanded a cardiovascular outcomes trial. The drug and its sister product Ryzodeg (insulin degludec/insulin aspart) have been approved in Europe and Japan.

Novo is unlikely to be able to provide the data requested by the FDA before 2015 and some observers have claimed that the agency has moved the goalposts in requesting the aforementioned trial for an insulin treatment. Mr Sorenson did not criticise the agency but told PharmaTimes World News that he would like to see harmonisation of regulatory regimes.

He said that a global approach makes sense especially given the fact that emerging key players such as China and Brazil have their own regulatory requirements which is making the process of submissions even more complex.