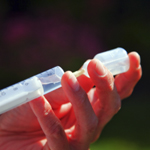 Bayer and Regeneron’s eye drug Eylea has matched its rival Lucentis in a new head-to-head trial.

This is according to the newly published VIEW 1 and VIEW 2 Phase III studies, which have been made available in the journal Ophthalmology. The drug is currently awaiting a decision from the European Medicines Agency, but received a positive opinion from the CHMP last month.

Lucentis has been approved for wet AMD – which is a leading cause of blindness in the Western world – for many years, but Eylea represents the first drug rival for Novartis.

Both are intravitreal injections that work as a VEGF-Eye Trap, and can inhibit the binding and activation of VEGF receptors. In a recent Phase III trial, Eylea also showed equivalency to Lucentis, but has so far failed to prove superiority.

But Eylea may have an edge over Lucentis as it is slightly cheaper at $1,850 per injection, compared to $1,950 for Roche and Novartis’ drug.

As it also requires fewer injections - once a month for the first three months and then bimonthly, versus monthly for Lucentis, meaning its annual cost is $8,000 less per year than Lucentis.

Lucentis made $1.4 billion in US sales last year and Eylea is forecast to reach around $1.1 billion in peak annual sales.

But Novartis has queried the trials methodology, saying the dosing aspects of its drug do not reflect real world practice.

In an emailed statement the firm said although the data “is interesting and helps contribute to knowledge on the management of wet AMD, it should be noted that the monthly dosing regimen of ranibizumab used in these studies is NOT [sic] reflective of its approved European posology, and therefore the way Lucentis is used in the ‘real-life’ clinical setting.”

Novartis said that many patients do not need monthly injections of its drug to gain - and then maintain - maximum visual acuity.

The company calculates that Eylea requires eight injections per year in the US, with the initial three doses are administered at monthly intervals and then subsequent doses at regular two monthly intervals.

The average number of injections with Lucentis in the UK is predicted to be 8.4, based on computer model analyses of six Lucentis clinical trials, but in the real world is lower, e.g. 5.6 with good visual acuity gains, according to Novartis.

But both Eylea and Lucentis’ biggest competitor could be Roche’s cancer drug Avastin (bevacizumab), which although is not licensed to treat wet AMD, now has at least 60% of the wet AMD market in the US, according to recent research by Bloomberg.

This is because the drug is chemically similar to Lucentis (and Roche co-markets the drug with Novartis), and is being used off-label by doctors due to its much cheaper cost of just $50 per injection.