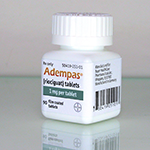 As expected, the US Food and Drug Administration has approved Bayer's Adempas to treat adults with two forms of pulmonary hypertension.

Specifically, the agency has given the green light to Adempas (riociguat) for patients with chronic thromboembolic pulmonary hypertension (CTEPH) and pulmonary arterial hypertension (PAH). The approval comes a couple of months after the FDA's Cardiovascular and Renal Drugs Advisory Committee voted 11-0 in favour of the soluble guanylate cyclase (sGC) stimulator for both indications.

Norman Stockbridge, director of the Division of Cardiovascular and Renal Drug Products in the FDA’s Center for Drug Evaluation and Research, noted that Adempas is the first in its class to be approved to treat pulmonary hypertension "and the first drug of any class to be shown to be effective for patients with CTEPH". The compound benefited from an expedited six-month priority review.

Adempas comes with a boxed warning that it should not be used in pregnant women because it can harm the developing foetus, while female patients can receive the drug only through a risk evaluation and mitigation strategy (REMS) programme.

Commenting on the approval, Nick Kim of the University of California San Diego said that it "equips physicians with a new approach to treating PAH". He noted that "while surgery should always be considered as the first treatment option for CTEPH", up to 40% of patients are not eligible for an operation and 10%-35% have disease that persists after surgery.

The approval rfor Adempas, which many observers believe is destined to become a blockbuster, rounded off a good day for Bayer which had started with the German group saying that five new molecular entities are projected to enter Phase III trials by 2015.

Three of them will be cardiology products. First up is finerenone, a next generation oral, non-steroidal mineralocorticoid receptor antagonist "which blocks the deleterious effects of aldosterone" for the treatment of worsening chronic heart failure (CHF), as well as diabetic nephropathy.

The second is an oral sGC stimulator for patients with worsening CHF, while molidustat is for anemia associated with chronic kidney disease and/or end-stage renal disease.

In oncology, copanlisib, an oral phosphatidylinositol-3 kinases (PI3K) inhibitor, has demonstrated promise for lymphoma, while in women's health, sPRM, an oral progesterone receptor modulator, "holds the promises of long-term treatment of patients with symptomatic uterine fibroids".