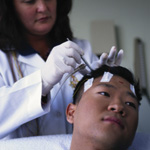 GlaxoSmithKline and partner Valeant Pharmaceuticals International have suffered a slight setback with the news that regulators in the USA need another three months to evaluate new data, and decide on final approval, of the firms' new epilepsy treatment Potiga.

Earlier this month, the US Food and Drug Administration's Peripheral and Central Nervous System Drugs Advisory Committee has voted unanimously (13-0) to recommend approval of Potiga (ezogabine) as adjunctive treatment for adults with partial-onset seizures. The panel also voted 11-0, with two abstentions, that the risk of urinary retention risk that has been associated with the drug “could be mitigated by patient monitoring."

The FDA had set a Prescription Drug User Fee Act date of August 30 to make its final decision but that has now been pushed back to November 30. The reason for the delay is the submission on August 26 of a formal risk evaluation and mitigation strategy for ezogabine. The REMS was requested by the agency in correspondence dated August 16.

Analysts are not too concerned by the delay to ezogabine, which is known as retigabine outside the USA and is also under review by the European Medicines Agency. Sales estimates range between $200-$800 million.