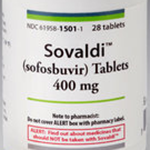 An excellent day for Gilead Sciences has seen the US biotech post record-breaking sales of its hepatitis C pill Sovaldi and approval in the USA for Zydelig to treat three types of blood cancer.

Since its launch in December, Gilead chief executive John Martin noted that Sovaldi has been prescribed for more than 70,000 patients in the USA and 10,000 in Europe, “underscoring the medical community’s recognition of the benefits of this product.” He added that “we look forward to making Sovaldi available in additional countries”.

Gilead faces near-constant criticism about the price of Sovaldi, which is unlikely to diminish as the revenues keep rising. However the company’s stance is that the drug represents excellent value for money given that it is actually curing people.

Aside from Sovaldi, Gilead’s HIV franchise also performed well. Its once-daily, single pill Stribild - a combination of elvitegravir, cobicistat, emtricitabine and tenofovir - soared 171% to $269.5 million, although the triple combo Atripla (efavirenz/tenofovir/emtricitabine) slipped 7% to $870.7 million. Sales of Truvada (tenofovir/emtricitabine) were flat at $806.6 million.

The good news continued for Gilead with the approvals from the US Food and Drug Administration for Zydelig (idelalisib).

First up, the oral inhibitor of phosphoinositide 3-kinase (PI3K) delta is being granted traditional approval to treat patients whose chronic lymphocytic leukaemia has returned. Used in combination with Rituxan (rituximab), Zydelig is to be used in patients for whom the Roche drug alone would be considered appropriate.

Under the accelerated approval programme, companies must conduct confirmatory trials. Also, Zydelig will carry a boxed warning about the risk of serious and potentially fatal toxicities, including liver toxicity, diarrhoea, colon and lung inflammation and intestinal perforation.