Goldacre vs Whitehead: Pharma is cleaning up its act 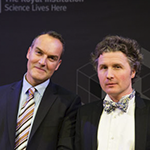 This is according to last night’s PharmaTimes debate at the Royal Institution, which saw Dr Ben Goldacre, author of Bad Science and Bad Pharma go head-to-head with the chief executive of the ABPI Stephen Whitehead, on the issue of whether pharma is cleaning up its act.

The debate had not shifted attitudes too dramatically, as this question was put the audience before the speakers took to the stage, and the numbers remained largely similar. The biggest difference were for those who were sitting on the fence: in the first vote 22% said they neither agreed not disagreed with the statement, while only 7% said the same after the debate.

There was acknowledgement from the audience that clinical data transparency was an issue, with one Roche representative saying: “Roche is listening. We could be more active; that’s why we are here [at the PharmaTimes debate] tonight.” This morning the Swiss firm announced new trial transparency measures, as covered on PharmaTimes World News, although they have been met with criticism.

But Stephen Whitehead hit back, saying the ABPI had been “working on data release for the past 10 years, but monitoring and compliance was needed to achieve ‘Good Pharma’”.

He also dismissed Goldacre’s claim that only 50% of all trial data was ever published, arguing that this was “historical”, and it was in fact closer to 78% - according to data he received from the FDA - while figures for the European Union covering 2010 and 2011 suggest a similar percentage, he said.

Whitehead deplored the title of the debate as "an insult", and described the campaign waged against the industry over these issues as "a travesty of the truth", he said.

"Patients believe the drugs they are given are not adequately tested - this is just not true," he said. Regulators see "every scrap" of data as part of the approval process, but none of them has issued a single comment in the debate on transparency, he pointed out.

"We agree that summary clinical trial evidence should be available publicly, and we are committed to greater transparency, but what is at issue is how we get there - it's not the 'what,' it's the 'how'," he said.

Whitehead also said that the industry "will not respond to PR-driven initiatives such as AllTrials," the campaign for greater clinical trial transparency, which was created by Goldacre, the BMJ and Sense about Science.

Earlier this month, however, GlaxoSmithKline broke ranks and became the first big pharma company to sign the AllTrials register. As exclusively revealed by PharmaTimes UK news last week, NICE has also announced its backing for the campaign, joining a host of other academic, charity and healthcare professional groups.

But the ABPI has said it will not sign up to full public disclosure because of public concerns over preserving patient anonymity. Ensuring this would be a huge undertaking, said Whitehead, and he wondered whether the cost of doing so would justify the benefit for drugs which have been on the market for a very long time

Individual patient data would be redacted from the trial information, said Dr Goldacre, but clinical quality assurance expert Dr Beat Widler, supporting Whitehead, warned that, with social media, it can be relatively easy for some patient information to be traced back to the individual.

"We must make results available but in a sensible way that doesn't make things worse. We need to understand what can go wrong," he cautioned.

But a speaker from the floor asked: when old drug data is released and shown to be flawed, will the industry be bankrupted by liability cases?

Dr Goldacre agreed that how to deal with historical data is a major problem. By what standards should this information be judged? By the standards of the time, or should there be an amnesty? This is likely to be about relative efficacy, he suggested, but emphasised that patients must be protected from now on.

Pharma should not fear transparency

Dr Godlee emphasised that calls for greater transparency did not threaten pharma and would bring it benefits such as a level playing field, less waste of resources, no more "good guy/bad guy" and the chance to have "a grown up conversation with the public".

She also warned of the danger of "making too much of the complexity of these issues".

We now have a unique opportunity to address the vital issue of transparency, said Dr Goldacre. "I've tried to engage the public in a problem that we've failed to fix behind closed doors," he said, and there is now a growing campaign, backed by politicians, the medical Royal Colleges - and with patient groups leading the way - and he urged the industry to recognise that “this is right”.

The conspiracy theories and misinformation about medicines and the industry that is disseminated through social media is fed by pharma’s failure to engage, he said, and called on the industry to recognise AllTrials as "an inevitability of history - even if you don't welcome it".

PharmaTimes would like to thank our sponsor for the event, Binley's.