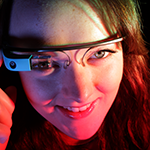 Researchers at Newcastle University are investigating Google Glass as an aid to help people with Parkinson’s disease improve their quality of life and retain their independence for longer.

The Newcastle team has been working with a group of Parkinson’s volunteers aged between 46-70 years on Glass, five pairs of which were donated by the internet search engine giant. The system works like a hands-free smartphone, displaying information on the lens of the Glass and the voice-operated technology is linked to the net.

The researchers are using the technology to provide "discreet prompts linked to key behaviours typical of Parkinson’s", such as reminding the individual to speak up or to swallow to prevent drooling. Glass is also being used as a personal reminder for things such as medication and appointments.

The team will also be exploring how the motion sensors in Glass can be used to support people with ‘freezing’, a behaviour caused by motor blocking and a common symptom of Parkinson’s.

John Vines, who is leading the team at Newcastle University, said it is very early days as Glass is such new technology "we are still learning how it might be used but the beauty of this research project is we are designing the apps and systems for Glass in collaboration with the users so the resulting applications should exactly meet their needs". He added that what was really encouraging from this early study "was how well our volunteers took to the wearable technology and the fact that they could see the potential in it".

Roisin McNaney (pictured), a speech and language therapist who is also working on the study, noted that people with Parkinson’s "are already coping with so much and one of the main causes of social isolation is the stigma around behaviours such as drooling and tremor which they have no control over". She talked about the importance of discreet prompts, saying that "the last thing we want is a system of cueing which is so obvious it adds to people’s overall embarrassment".

Claire Bale, research communications manager at Parkinson’s UK, welcomed the Google Glass study, saying it is "an exciting example of how new technologies could be used to improve the lives of people living with Parkinson’s by tackling a wide variety of problems – from freezing to remembering to take their medication on time". However, she added that to make the most of the potential of new technologies, "it’s essential that researchers work in partnership with the real experts in the condition – people living with Parkinson’s."

Click on the link below to see the technology in action