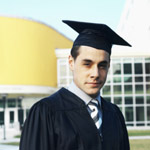 Pharmaceutical giant GlaxoSmithKline has unveiled a new tactic to lure fresh talent into the company, promising to pick up the tab for new graduates' university education.

The drugmaker said yesterday that it would offer this extra financial support to graduates in order to help it "attract, recruit and retain the best talent and reflect the changing environment in the UK for students", at a cost of around £3 million a year.

It is anticipated that under new government proposals, some universities will be tripling tuition fees to around £9,000 a year, which means that students will be left with bills or around £27,000 (per three-year undergraduate degree) for their education alone.

Around 50-100 undergraduate students from various academic areas are recruited into the firm's UK Graduate Training Programmes or other roles every year, and those joining will be reimbursed their tuition fees when they start full employment, but are then be obliged to stay at the firm for a minimum of two years.

"The company believes these measures will help ensure that GSK remains a highly desirable place for graduates to consider working upon leaving university", it said in a statement, adding that its new recruitment drive will kick off in 2012, to mirror the government's timeline for raising tuition fees.

In other news at GSK, the IMPACT Awards, which it runs in partnership with The King's Fund, has seen 10 charities in the UK each winning £25,000 in recognition of their "outstanding contribution" to healthcare.

The awards provide a "vital source" of cashflow for the winners, particularly during the current era of austerity and budget pressures, and help to encourage innovation and good practice throughout the sector, the firm said.

The King's Fund's Lisa Weaks stressed the importance of recognising the contribution of charities to healthcare particular as health service reforms and spending cuts take place, as "their prevention and early intervention schemes are helping the NHS save money".

As well as receiving £25,000, the winners also get to attend a five-day development programme providing training, development and networking opportunities.