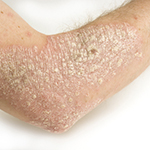 GlaxoSmithKline is to start a new Phase III study of ofatumumab as a treatment for pemphigus vulgaris, a rare autoimmune disorder of the skin, according to partner Genmab.

The Danish biotech and the drug major are long-term partners on ofatumumab which is already marketed, as Arzerra, for chronic lymphocytic leukaemia. This new study will include 136 patients with active pemphigus vulgaris who have achieved disease control on a stable dose of steroids prior to randomisation between ofatumumab or placebo.

With pemphigus vulgaris, the immune system produces antibodies that attack healthy cells in the skin and mucous membranes. This causes burn-like blisters and sores and may lead to secondary skin infections, dehydration, sepsis and death. The disorder affects just seven people per million worldwide and the current standard treatment is systemic glucocorticoids.

New lease of life for teprotumumab

Staying with Genmab, last month it was revealed that another of the Copenhagen-based firm's human antibodies, teprotumumab, developed through a pact with Roche, will restart clinical development in a Phase II study in patients with active thyroid eye disease, also known as Graves orbitopathy (GO).

Teprotumumab, which targets the insulin-like growth factor-1 receptor was previously investigated unsuccessfully in various cancer indications. However, Roche has licensed the drug to River Vision Development Corp, which is testing the drug in GO, which causes the eyeballs to protrude from the socket.