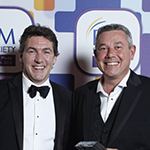 Vernon, now working at the European digital centre of excellence at GSK, and formerly a committee member at the PM Society, won for his work in integrating digital tools into GSK’s sales forces across Europe.

Previous winners of Digital Pioneer Award include John Pugh, head of digital at Boehringer Ingelheim and creator of pharma first foray into gamification with the recent launch of Syrum and Alex Butler, previously of Janssen and now co-founder of the digital services agency The Social Moon.

Creative Lynx, alone and in joint entries with MedNet Consult and Havas Life Medicom, were the stand-out winners, taking home five trophies out of the total 16, closely followed by Big Pink and woolley pau gyro with two each.

Chair of the Digital Media Awards, Rachel Farrow, said: “Time and time again we heard from the judges this year how the standard of entries has improved. It’s a real marker of success for digital as an integrated tool in healthcare communication that we are seeing such a broad range of agencies and companies entering campaigns that truly represent excellence.”

For the first time, healthcare comms agencies had a big presence with Aurora, Havas Life Medicom and Tonic Life Communications each scooping a gong.

Over 500 guests attended the awards ceremony, which was held at its regular home at The Brewery in London, where this year they were entertained by qualified GP and comedian Paul Sinha and the comedian Dominic Holland.

One of the highlights of the evening was the Innovation Category, which was presented by Para-T cyclists and 2012 medal winners Jody Cundy, MBE and David Stone, MBE.

Vernon will be one of the lead speakers at PharmaTimes's Digital Club, which is being held on 19 October at Park Plaza Westminster Bridge, Waterloo, London.

The theme for this latest meeting is: 'Why should your boss support digital initiatives?' To find our more, visit our dedicated Digital Club webpage here: http://bit.ly/pNGvVA

Boehringer launches Syrum to the public
Tweets by @PharmaTimes