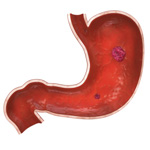 Roche's Herceptin has been approved by regulators in Japan for stomach cancer.

Specifically, the Swiss major's Chugai Pharmaceutical Co subsidiary announced that it has got the green light for Herceptin (trastuzumab) from the Japanese Ministry of Health, Labour and Welfare for the additional indication of advanced or recurrent gastric cancer overexpressing the HER2 protein that  cannot be treated with surgery. The drug is already available for breast cancer.

This latest approval is based on the Phase III ToGA study, which included Japan and showed that patients with HER-2 positive forms of the disease given Herceptin in addition to chemotherapy lived longer than those taking the latter alone.  Chugai noted that in Japan, gastric cancer is the second highest causal factor among cancer types that leads to deaths and it is estimated that there were 110,000 new patients in 2010.

Herceptin was approved for HER2-positive metastatic gastric cancer in Europe and the USA in January and October 2010, respectively.