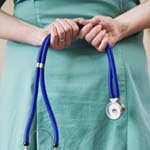 Nottingham Primary Care Trust has partnered with seven pharmaceutical companies and a charity to better the care of patients with diabetes and slash the number of unplanned hospital admissions.

The NIMROD (Nottingham NHS and Industry Maximising Resources and Outcomes in Diabetes) project is a joint initiative between the PCT, AstraZeneca, Lilly UK, Novartis, Novo Nordisk, MSD, Sanofi Aventis, Pfizer and Diabetes UK, the first time a national charity has formally joined such a scheme.

If left untreated or managed ineffectively, diabetes can lead to a whole host of devastating complications such as heart disease, stroke and blindness, and, as around 10% of the NHS budget is spent on treating the illness and its complications, it represents a huge burden on the purse strings too.

Despite a fairly young demographic and an average prevalence of the disease, the rate of complications due to diabetes is significantly higher in the area covered by Nottingham PCT than in other comparable trusts, NIMROD Project Manager Jan Balmer told PharmaTimes UK News, explaining the rationale behind the initiative. In 2009/10, more than 600 patients were admitted to Nottingham University Hospital trust sites with diabetes-related complications, which claim around 20 lives a year in the region.

Under the NIMROD project, the treatment of people admitted to hospital will be analysed to gage whether local care pathways before admission adequately reflect the National Service Framework for diabetes and National Institute for Health and Clinical Excellence guidelines.

This, it is hoped, will help to identify the areas in which improvements can be made to service provision. On the patient side, the project aims to provide support to the 12,800 people with diabetes in Nottingham to help them better manage their condition and thus reduce the number of emergency admissions to hospital.

NIMROD is set to run for a period of two years, and will be equally funded by Nottingham PCT (50%) and the seven pharmaceutical companies (50%) involved in the project, Balmer said, commenting: "We all have a shared interest in improving people’s health and reducing their need for hospital treatment and by pooling our skills, experiences and resources we can benefit patients.”

Under the rise of the government’s QIPP (Quality, Innovation, Productivity and Prevention) agenda, joint working projects between pharma and the NHS have already celebrated successes to date.

Nottingham PCT has been leading the way with such schemes from the start, going back to the ground-breading Happy Hearts programme to boost patient care in heart disease, which was launched in 2007, followed by the INFORCE initiative targeting chronic obstructive pulmonary disease, NIMROD and the upcoming Better Balance, Better Bones scheme for osteoporosis, on which more details will be unveiled soon, Balmer noted.

The Association of the British Pharmaceutical Industry said it is pleased to see the continuation of the joint working approach in NHS Nottingham City with project NIMROD. "The main aim of Joint Working is to improve patient care and deliver mutual benefit for both the NHS and the Pharmaceutical Industry. Collaboration of local stakeholders, with pooling of skills, and resources can only benefit patient care", a spokesperson for the Association told PharmaTimes UK News.

Balmer also sits on a subgroup at the Department of Health which looks at how local joint working projects can be upscaled throughout the nation. It is important that learnings and experience from projects are captured so that other organisations can evaluate whether they could be applicable in their own localities, she told PT, adding: "If there is a significant impact on outcomes with NIMROD, then there's no reason the model couldn't be implemented somewhere else in the country".