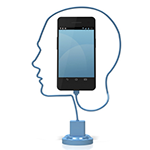 A smartphone-based tool may be an effective and far cheaper alternative to traditional ophthalmic imaging equipment in evaluating a diabetic eye disease.

Research has been presented at the American Academy of Ophthalmology meeting in Chicago from three Italian universities which developed a small optical adapter - called D-Eye - which could attach magnetically to an iPhone 5. This smartphone ophthalmoscope was then used to evaluate diabetic retinopathy, which is caused by elevated blood glucose levels and can lead to vision loss and blindness.

The traditional method for monitoring the progression of the disease is through retinal slit-lamp biomicroscopy, which enables ophthalmologists to look at the back of the eye's interior. However, this requires a large piece of specialised equipment, “posing a significant challenge for monitoring patients living in rural or low resource communities”.

To address the challenge, researchers from the universities of Brescia, Molise and Federico II in Naples used D-Eye as well as a slit-lamp biomicroscope to perform dilated retinal digital imaging on 120 patients with diabetes. After comparing the results of the smartphone method to the traditional one, an exact agreement between the two methods was found in 85% of the eyes and an agreement within one step (or grade of disease progression) was found in 96.7% of the eyes.

In the smartphone ophthalmoscopy results, nine eyes were not gradable due to small pupil or cataract compared with four with the biomicroscopy. Therefore, while the latter is still the more accurate method for grading diabetic retinopathy, researchers believe the iPhone tool will be very valuable in communities “who would normally receive little to no testing at all”.

Lead researcher Andrea Russo noted that using the iPhone method “is thousands of dollars cheaper than using traditional equipment" and “the affordability of this option could make it much easier to bring eye care to non-hospital remote or rural settings”.