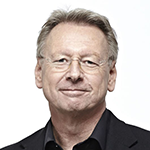 Paul Workman, the new chief executive of the Institute of Cancer Research in London  has pledged to attack the disease’s ability to evolve and evade treatment.

Prof Workman (pictured), who had been interim CEO since July, says he plans to embed the ICR’s recently-established Centre for Evolution and Cancer and innovative research projects in cancer biology and the disease's survival networks in an integrated programme “aimed at overcoming the scourge of treatment resistance”. He speaks about three priorities in drug discovery, the first being “expanding the druggable cancer genome”.

He notes that although around 500 cancer-causing proteins are known, “we only have drugs that target about 5% of them [so] it will be essential to focus more effort on discovering innovative drugs that act on currently untargeted cancer proteins, rather than developing me-toos”.

The second priority is discovering and implementing the best combo, Prof Workman says, because to overcome resistance, “we will need to use drugs in combinations – as in HIV and tuberculosis – so they can together cut off cancer’s evolutionary escape routes”. Thirdly, he stressed the importance of “discovering cancer network drugs” which can hit “cancer harder than drugs targeted to only one protein”.

Prof Workman has worked at the Universities of Stanford, Cambridge and Glasgow, held a senior post at AstraZeneca and founded two biotechs – Chroma Therapeutics and Piramed Pharma. He said “it is an incredible honour for me to take the helm at one of the world’s most influential cancer research organisations”, adding that ICR already discovers more new cancer drugs than any other academic grouping, “but I believe we can take that success to another level by launching a three-pronged attack on cancer evolution and drug resistance”.

“We can’t expect to discover a new generation of cancer drugs that truly transform outcomes for patients unless we understand the biological reasons why some new drugs have been less effective than hoped”, he concluded.