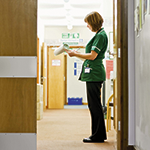 England’s National Institute for Health Research (NIHR) Clinical Research Network has seen a significant upturn during its latest financial year in the number of first global patients recruited for commercial studies through the network.

A total of 25 first global patients were recruited for industry-sponsored studies in 2013/14, compared with a tally of 42 since the Network started to track this performance indicator in spring 2011.

Recruiting a first global patient is a crucial marker of clinical-research delivery for the life-sciences industry, as it means NIHR CRN is managing to drive down study set-up times, the Network points out.

“Achieving a first global patient shows that the UK has the infrastructure to compete on the international stage in terms of clinical research study set-up,” stated Dr Jonathan Sheffield, chief executive officer of the Clinical Research Network.

The 25th study to make the grade is being conducted with Ocriplasmin (Jetrea), ThromboGenics’ treatment for the rare eye condition vitreomacular traction, at Manchester Royal Eye Hospital through the Central Manchester University Hospitals NHS Foundation Trust.

Five of the studies to have achieved first global patient were sponsored by Novartis UK, whose senior clinical study manager, Darren Gerrard, commented: “What we excel at is being the fastest country globally to start our trials and get patients on to new treatments. This is encouraging more clinical trials to be placed in the UK, when many similar companies are pulling out”.

Launched around six years ago, the national costing template for commercial research in the National Health Service is not binding on NHS organisations.

There have been complaints about sometimes sharp disparities in rates levied by different Trusts, especially where the choice of trial location is at least partly driven by access to in-demand key opinion leaders.

Where Trusts are using the template, Gerrard added, it is leading to “excellent metrics on start-up and giving them more time to recruit to target”.

“I cannot emphasis enough how a consistent approach to site set-up in line with NIHR guidance has become. We set ourselves above the competition by aligning site costs and using standardised contracts”.