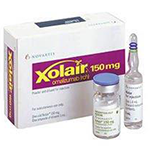 Regulators in Europe have given the thumbs-up to Novartis' asthma blockbuster Xolair as a treatment for severe hives.

The European Commission has approved the use of Xolair (omalizumab) as an add-on therapy for the treatment of chronic spontaneous urticaria (CSU) in patients with inadequate response to H1-antihistamine treatment. The approved dose is 300mg by subcutaneous injection every four weeks.

The Swiss major said the drug is the only approved therapy in Europe for the up to 50% of patients who do not respond to antihistamines. The unpredictable skin disease is characterised by a debilitating form of chronic itch, hives and deep swelling in the tissue of the skin.

The approval follows the Committee for Medicinal Products for Human Use's positive opinion on Xolair, which was based on the results of three Phase III studies involving nearly 1,000 patients. The drug improved quality of life, showed significant superiority compared to placebo in reducing the symptoms of CSU and in many cases completely cleared itch and hives.

Tony Bewley at Barts Health NHS Trust in London said Xolair, which is co-developed with Roche's Genentech unit, has "real potential to revolutionise the treatment of patients with CSU" and "it provides clinicians with a new and much needed option".

Xolair was approved in the USA for moderate-to-severe persistent allergic asthma in 2003 and has been available in the UK since 2005.