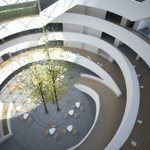 Novo Nordisk is investing some 1 billion Danish kroner (134 million euros) in two new office buildings that will act as its corporate centre in Bagsvaerd, Denmark.

The project is expected to create more than 300 jobs during the construction phase and the new office premises will house Novo’s top management and 1,100 administrative employees. The centre is expected to be ready for occupancy at the end of 2013.

Chief executive Lars Rebien Sorensen said that although Novo "is primarily set to grow outside of Denmark in the coming years, we are looking forward to consolidating the administrative functions in Bagsvaerd, where we have been present since the 1950s". He added that the new buildings "will give our employees the best conditions for interacting across functional divides and with our colleagues abroad".

Around 14,000 of Novo’s 32,000 employees work in Denmark and the diabetes specialist says the insulin molecule "with its contoured spiral shape was a key source of inspiration" for the building's designers, Henning Larsen Architects.

In June, Novo announced it was investing 1 billion kroner in a new facility in Kalundborg which will be used for the production of biopharmaceuticals such as the haemophilia drug NovoSeven (recombinant Factor VIIa), the growth hormone Norditropin and the glucagon product GlucaGen. The plant is expected to create 120–150 new jobs over the next three years.