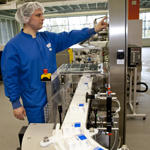 Earnings at Boehringer Ingelheim last year took a thumping due to generic competition but the blockbuster potential of the bloodthinner Pradaxa and a bursting pipeline of oncology and diabetes products promise a healthy future for the independent German drugmaker.

That was the message coming out of the firm's annual press conference. The financials showed that  net income dropped 49.5% to 888 million euros last year, hurt by the loss of patent protection in the USA to Flomax (tamsulosin) for the treatment of benign prostatic hyperplasia and Mirapex (pramipexole) for Parkinson’s disease.

However sales slipped just 1.1% to 12.59 billion euros, driven by Spiriva (tiotropium) for chronic obstructive pulmonary disease, which is partnered with Pfizer and brought in 2.86 billion euros, up 19.1%. Sales of the drug in the USA reached 1.33 billion euros. The blood pressure drug Micardis (telmisartan) rose 11.6% to 1.56 billion euros.

While the earnings fall would set alarm bells ringing at the vast majority of drugmakers, the Boehringer view is different and it says that "sustained success and securing the company's independence long-term are more important to us than optimising short-term profit". The clearest example of this is its R&D budget which increased again by some 230 million euros to over 2.40 billion euros.

Chairman Andreas Barner said the company will continuously invest "significantly more than 20% of our overall revenues in in-house R&D in the awareness that this is to the detriment of our operating income". This will "ensure that our company is fit for the future".

Indeed, Englebert Tjeenk Willink, head of pharmaceutical sales and marketing, told PharmaTimes World News that as opposed to many peers, Boehringer believes that even higher investment in R&D is needed to provide the candidates that can prevent loss of earnings from the likes of Spiriva in the future, although any potential generic competition to the latter is about seven years down the line.

The big growth driver is going to be Pradaxa (dabigatran etexilate), the orally administered coagulation inhibitor which was approved in the USA last year for the prevention of stroke in patients with atrial fibrillation, the first new drug in this area for 50 years.

Also approved in Japan (about a year earlier than expected), approval and launch is expected in the coming months in Europe.  The company does not go in for making forecasts about future sales but Prof Barner noted that "great interest has been indicated by convincing prescription figures" in the USA and at least 180,000 patients will be on Pradaxa before mid-year, double the number from the end of January.

He also underlined the potential in the company's pipeline, noting that in oncology, BIBF 1120 (a new triple angiokinase inhibitor) and afatinab (a new generation of tyrosine kinase inhibitors) have made good progress in Phase III clinical development, including in lung, breast, ovarian and colon cancer.

In diabetes, linagliptin, a dipeptidyl-peptidase-4 inhibitior, was filed worldwide last year and Prof Barner said "we expect the first approvals in what for us is an important therapeutic area in mid-2011". Potential treatments for hepatitis C and idiopathic pulmonary fibrosis are also progressing well.