Pfizer and Novartis file 'breakthrough' meningitis jabs in US 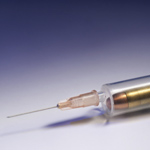 Drug giants Pfizer and Novartis have submitted applications for their meningitis B vaccines to the US Food and Drug Administration on the same day.

Current vaccines in the US do not offer any protection against the B strain of the disease, which is responsible for about 40% of meningitis injections, and the drugmakers are now head-to-head in the race to reach the market first and meet this unmet need.

Novartis' Bexsero (Multicomponent Meningococcal Group B Vaccine [recombinant, adsorbed]) is already approved in 34 countries including across the European Union, Canada and Australia, but has also been given to students and staff at Princeton University and the University of California Santa Barbara following meningitis B outbreaks on their campuses under a special license from the FDA.

Pfizer's vaccine - a recombinant form of the protein LP2086 - is designed to prevent invasive meningococcal disease caused by Neisseria meningitidis serogroup B in 10 to 25 year olds, and has shown promise in Phase II trials.

Both Novartis' and Pfizer's offerings have been awarded coveted 'breakthrough therapy' designations in the US, showing that regulators believe preliminary clinical evidence indicates that they both may demonstrate substantial improvement over existing therapies.

Despite the availability of antibiotic treatment, between 10% and 15% of patients with meningococcal disease die and 11% to 19% of those who survive are afflicted with long-term disabilities, such as brain damage, hearing loss, learning disabilities or limb amputations, again highlighting the need for new methods of prevention and treatment.

Regulators now has 60 days to decide whether it will accept the filings for review.