Pharma has to win respect of providers, says Janssen head 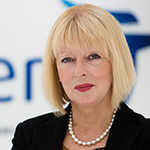 Big pharma needs to win the respect of, and build trust with, healthcare providers so that patients can truly benefit from 'around and beyond the pill' activities.

So says Jane Griffiths (pictured), company group chairman of Johnson & Johnson's Janssen Europe, Middle East and Africa, who told PharmaTimes that companies are well aware of the need to deliver better patient outcomes rather than just selling drugs. Industry knows "how to get the very best out of its medicines and sometimes that means having the right support systems around them to deliver the best results.

She added that "compliance programmes enabled through mobile devices would be a good example. We have been developing a solution called Care4Today Mobile Health Manager, which since its US launch late last year has been downloaded over 260,000 times, has 60,000 registered users and was ranked number one in the health & fitness app store. We plan to launch it in Europe this yea".

However, she acknowledges that "sometimes it is difficult to deliver them into healthcare systems where maybe there has been a lack of trust between the healthcare delivery people and industry people". In order to win respect, Ms Griffiths says that industry is tackling transparency around clinical trial data and doctor payments, "areas where we have been criticised in the past," and also believes that the impact of the economic crisis has resulted in more openness for partnerships.

Such crises "sometimes drive extraordinary behaviour", she said, arguing that in times of financial constraints, "people are more open about collaborating to deliver healthcare more efficiently". In terms of a collaboration that works, Ms Griffiths made reference to the Janssen Healthcare Innovation partnership in mental health with South Essex Partnership University NHS Foundation Trust.

The aim of the programme, which was launched nearly three years ago, is to reduce the risk of relapse and subsequent distress suffered by patients with diagnoses of schizophrenia and affective disorders. Janssen said the agreement involves a patient-focused care management approach which includes "a comprehensive psycho-education package, a wellbeing programme and a telephone support service that links patients, carers and clinicians".

Ms Griffiths added that this 'beyond the pill' project has been extremely successful, saying that "if you intensively train and educate staff, patients and families about how to spot impending relapse", it can make a huge difference. She cited a recent study which shows that the programme led a reduction of 50% in hospitalisations.

She added that Janssen is also working with trusted partners to deliver cancer and schizophrenia therapies to patients at home, when appropriate. Ms Griffiths concluded by stating that "a lot of cost within healthcare is people occupying beds for the day – any way you can provide a treatment that keeps people out of hospital is a good thing".

Ms Griffiths will give a keynote speech at the eyeforpharma conference in Barcelona on March 18 on "above and beyond the pill: why the delivery of true patient value always makes sense".