Russia is land of the rising profits for Takeda 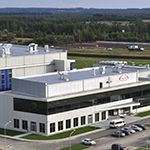 As part of plans to expand its presence in Russia, Takeda has completed work on its 75 million euro manufacturing facility in Yaroslavl.

The plant, some 280 kilometres outside Moscow, will initially make three products widely used in Russia - Cardiomagnyl (aspirin/magnesium hydroxide), the bovine blood derivative Actovegin and calcium tablets.  Around 200 jobs will be created at the Yaroslavl site (pictured), which Takeda notes has been constructed "on time and on budget to local and international GMP standards". The facility has the capacity to manufacture 90 million sterile ampoules and more than two billion tablets per year.

Takeda is already well placed in Russia, where it is the seventh largest pharmaceutical company, thanks to its 9.6 billion euro acquisition of Nycomed last year. The Russia/CIS region is the biggest emerging markets earner for the Tokyo-headquartered group and is expected to contribute sales of 630 million euros in 2012, up 15%, and similar growth is expected through 2016. Russia/CIS pharma sales as a whole came in at $14.70 billion last year and are expected to grow at 11% between 2012 and 2016.

Therefore Takeda is confident it can outgrow the market in Russia and reap the benefits of having been in the country since the mid-80s in Soviet times, Jostein Davidsen, head of emerging markets, told PharmaTimes World News at a meeting in Moscow to announce the completion of the facility in Yaroslavl. He was pivotal in setting up the Nycomed operation in Russia in 1993 and has seen the way business is done in the country go through a dramatic change.

Specifically, the last three-to-five years has seen an "enormous" shift in improving compliance, said Mr Davidsen, with regards to ethics, safety standards and transparency, whereas previously doing business in Russia was "very complex". Things are much improved, he noted.

Up to 70% of the Russian pharma market is branded generics and Mr Davidsen told PT that Takeda now has the right portfolio mix which is suited to patient needs. Over-the-counter drugs make up 20% of the market and the firm's presence is strong in that sector, while 50% of revenues Takeda banks from Russia/CIS come from products that have been licensed in from the likes of Merck Serono and Biogen Idec.

However, instead of its 700-strong field force selling principally branded generics and OTCs, the unit now has access to Takeda's innovative products (it has a late-stage pipeline containing 20 drugs). Russia is still very much an out-of-pocket market (about 60%-70%), Mr Davidsen noted, but with plans for reimbursement and co-payment schemes from the Russian government set to come into force in the next couple of years, the timing will be right for new Takeda products to launch in Russia.

Mr Davidsen added that the facility in Yaroslavl will be the first such site to be opened by a global drugmaker in Russia. He noted that the move underlines Takeda's genuine commitment to the country, something that president Vladimir Putin's government has been insisting on. Local production also comes with a healthy incentive in that products made in Russia can be sold at a 15% premium.