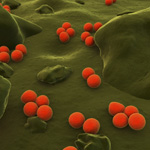 Researchers have discovered a new strain of gonorrhoea that is resistant to all currently available antibiotics.

Details of the discovery were presented at the International Society for Sexually Transmitted Disease Research conference in Quebec City, Canada. This new strain, called H041, was discovered in Japan and "is likely to transform a common and once easily treatable infection into a global threat to public health", the researchers claim.

Analysing H041, a previously-unknown variant of the bacterium that causes gonorrhoea, Neisseria gonorrhoea, the researchers identified the genetic mutations responsible for its extreme resistance to all cephalosporin-class antibiotics, the last remaining drugs still effective in treating this particular sexually-transmitted disease.

Speaking about the discovery, Magnus Unemo of the Swedish Reference Laboratory for Pathogenic Neisseria, said that "this is both an alarming and a predictable discovery". He noted that "since antibiotics became the standard treatment for gonorrhoea in the 1940s, this bacterium has shown a remarkable capacity to develop resistance mechanisms to all drugs introduced to control it".

Dr Unemo added that "while it is still too early to assess if this new strain has become widespread, the history of newly-emergent resistance in the bacterium suggests that it may spread rapidly unless new drugs and effective treatment programmes are developed".

Gonorrhoea is one of the most common STDs in the world and the number of cases in the USA alone is estimated at 700,000 annually. About 50% of women and 2%-5% of men who are infected have no symptoms and when symptomatic, it is characterised by a burning sensation when urinating and can cause discharge from the genitals. It can lead to infertility and increases the risk of HIV transmission.

Spread of antibiotic resistance creating a crisis - WHO
Calls for shake-up to reward antibiotic R&D
Spotlight on superbugs at ECCMID meeting
http://www.orebroll.se/en/Orebro-University-hospital
Tweets by @PharmaTimes