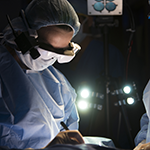 High-tech glasses have been developed in the USA which could help doctor's ability to locate hard-to-see cancer cells during surgery and reduce the need for follow-up operations.

The specs, which have been developed at Washington University School of Medicine in St Louis may help surgeons visualise cancer cells, which glow blue when viewed through the eyewear. They will be able to distinguish the latter from healthy cells, helping to ensure that no stray tumour cells are left behind during surgery.

Breast surgeon Julie Margenthaler of Washington University (pictured here performing a an operation with the glasses, photo courtesy of Bob Boston), said that "we’re in the early stages of this technology, and more development and testing will be done, but we’re certainly encouraged by the potential benefits to patients". She added: "Imagine what it would mean if these glasses eliminated the need for follow-up surgery and the associated pain, inconvenience and anxiety.”

Current standard of care requires surgeons to remove the tumour and some neighbouring tissue that may or may not include cancer cells. Dr Margenthaler said about 20%-25% of breast cancer patients who have lumps removed require a second surgery.

The technique incorporates custom video technology, a head-mounted display and a commonly-used targeted molecular agent (indocyanine green, approved by the US Food and Drug Administration) that attaches to cancer cells. In a study published in the Journal of Biomedical Optics, researchers noted that tumours as small as 1mm in diameter could be detected. FDA pproval for a different molecular agent which specifically targets and stays longer in cancer cells is currently being sought.

See the YouTube link below for a real-time video of what Dr Margenthaler saw using the glasses.