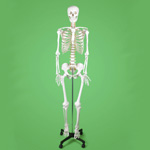 Modern Biosciences has been boosted by a deal with Johnson & Johnson which could be worth up to £176 million to the UK firm.

The collaboration, facilitated by the J&J Innovation Centre in London, will see the healthcare giant’s Janssen Biotech unit work with MBS on the latter’s novel bone-protective compounds for the treatment of rheumatoid arthritis. The most advanced of those is currently in pre-clinical development and is due to enter Phase I in 2015.

MBS believes its compounds have a novel mechanism of action that targets both the inflammation and bone destruction associated with RA. They may also have the potential to reverse bone damage via a directly protective effect the firm believes is unique amongst existing agents.

Chief executive Sam Williams said the MBS compounds “have unique characteristics compared to existing treatments for RA and we believe Janssen is an ideal partner with which to take the molecules forward”. The latter is a major player in the inflammatory field with the blockbuster Remicade (infliximab) and its follow-on Simponi (golimumab), partnered with Merck & Co.

Under the terms of the deal, MBS will get an undisclosed upfront fee and and development, regulatory and commercial milestone payments, plus royalties.

MBS, a spin-out company from the University of Aberdeen, is 61.1%-owned by the intellectual property company IP Group. Last week, its bone-protection programme received a £2.4 million award from Innovate UK through the BioMedical Catalyst, following on from a£1.6 million BMC award in 2012.