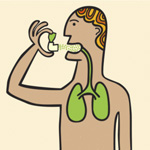 Vectura of the UK has acquired fellow respiratory specialist Activaero of Germany for £108 million and raised £52 million to help pay for the deal.

The Chippenham-based group is getting hold of Activaero's smart nebuliser-based inhaled technology which allows drug deposition into targeted areas of the lung. Its lead product is Favolir, a budesonide-containing treatment for severe asthma.

Vectura says that Favolir, an un-partnered late-stage product, has "peak sales potential which exceeds the total deal consideration". The company feels it could sell the treatment itself as it would only require a small, specialist salesforce "that targets an addressable global market size of approximately $2 billion".

Chris Blackwell, Vectura chief executive, said the deal "represents an important step towards building a sustainable specialty pharma business,” adding that it will "enable us to build a therapeutic specialist in airways diseases". He added that "our considerably deeper pipeline and new partnerships will provide us with the opportunity to drive organic growth [and] the combined company is well positioned to extract even more value from our broader technology base and potentially retain greater economics from pipeline assets".

Vectura has been on a good run of late, helped by a steady stream of launches in Europe by partner Novartis of AirFluSal Forspiro, their generic version of GlaxoSmithKline's chronic obstructive pulmonary disease and asthma blockbuster Advair/Seretide (salmeterol/fluticasone).