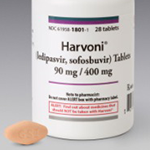 Gilead Sciences is celebrating after US regulators gave the green light to Harvoni, the first once-daily combination pill to be approved for hepatitis C.

The Food and Drug Administration has approved Harvoni, which combines Gilead’s mega-blockbuster Sovaldi (sofosbuvir), a nucleotide analogue polymerase inhibitor, with the firm’s the NS5A inhibitor ledipasvir, for HCV genotype 1 infection. The latter accounts for around 70% of cases.

The thumbs-up is hugely significant given that for the first time, a therapy has been approved that eliminates the need for interferon injections and ribavirin which are challenging to take and can cause flu-like side effects. The green light is based on three Phase III studies which showed that Harvoni achieved cure rates - sustained virologic response - (SVR 12) of 94%-99%.

Harvoni, which received a priority review and had breakthrough therapy designation, is the third HCV drug approved by the FDA in the past year, following Johnson & Johnson’s Olysio (simeprevir) in November 2013 and Sovaldi a month later. Edward Cox, director of the Office of Antimicrobial Products in the agency’s Center for Drug Evaluation and Research, noted that with these new treatments for HCV, “we are changing the treatment paradigm for Americans living with the disease. Until last year, the only available treatments…required administration with interferon and ribavirin”.

Nezam Afdhal of the Harvard Medical School and a principal investigator in the Harvoni trials, said the approval is particularly exciting because “for the first time, the vast majority of patients can be cured with a once-daily pill in only eight or 12 weeks”.

UPDATE: As with Sovaldi, the price of Harvoni ($1,125 per pill) has caused uproar in some quarters. This means a 12-week supply will cost $94,500 and John Rother, chief executive of the National Coalition on Health Care, said that by charging this amount, “Gilead has made clear that it values Wall Street above the interests of patients, taxpayers, employers and working families”. He claimed that the company’s “refusal to take a more reasonable and moderate approach to pricing cements its status as the poster child for everything that is wrong with pharmaceutical industry pricing”.

Mr Rother went on to argue that Gilead’s “escalator pricing strategy could undermine the system of healthcare finance that has supported the biomedical innovation that we all want to continue. Unreasonable pricing not based on value threatens the sustainability of our entire health care system”.

However, Gilead estimates that 40% of patients may be able to take the combo for eight weeks, bringing the price to roughly $63,000. The company has regularly pointed out that the price of not using its HCV drugs is much higher; about 3.2 million Americans are infected with HCV, and without proper treatment 15%-30% will go on to develop cirrhosis.