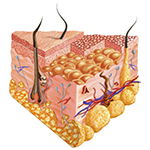 Venn Life Sciences, the clinical research organisation (CRO) based in Dublin, Ireland, has acquired for £210,000 the trading assets of dermatology company Evocutis, including the latter’s Labskin skin substitute, an alternative to animal testing for dermatology products including medicines and cosmetics.

Venn is acquiring from Exocutis the intellectual property rights to LabSkin and related equipment, as well as the novel anti-acne compound SYN1113. Venn will out-license this latter patented and clinically proven technology through its division InnoVenn.

The financial components are £210,000 worth of new ordinary shares in Venn, calculated in accordance with the disposal agreement; a royalty of 7.5% on gross sales of LabSkin for three years from date of the acquisition; and a royalty of 25% on future sales of, or out-licensing agreements for, SYN1113.

The acquisition is expected to be completed on 13 March 2014, provided Evocutis’ shareholders approve the disposal of the intellectual property rights.

As Venn pointed out, it has been illegal since March 2013 to sell skincare or cosmetic products in the European Union that have been tested on animals. The Venn board believes this regulatory change has opened up “a significant market opportunity” for LabSkin.

Exocutis, which operates out of Wetherby in northern England, informed shareholders in late February that it was planning to dispose of its intellectual property in LabSkin and SYN1113, as well as related assets.

The company did not have the financial and operational resources to grow sales of LabSkin at the necessary rate to make Exocutis self-sustaining in its present form, it explained.

In the face of increasing financial difficulties, the company had held discussions with a number of third parties about a potential corporate transaction, but in October 2013 it announced that none was forthcoming.

Tony Richardson, chief executive of Venn Life Sciences, said the acquisition of Exocutis’ ready-to-market innovative products and capabilities, with over 10 years of research behind them, “further enhances our credibility in the area of skin science”.

As Richardson pointed out, in December 2013 Venn paid €0.6 million for Germany’s CRM Clinical Trials, a CRO with a strong pedigree in dermatology and skin science.

The Exocutis assets “will allow us to deepen our capabilities in the skincare and cosmetic arena and position Venn as a key player in this sector”, he added.

The company has identified potential licensees for SYN1113 and “would expect to follow up with further technology initiatives in InnoVenn”, Richardson noted.

On Venn’s admission to the London Stock Exchange’s AIM alternative investment market in December 2012, “we communicated to investors that we would hope to add some intellectual property value to Venn if this could be achieved in a capital efficient way and without complicating our core business”, he pointed out.