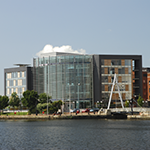 The Welsh Government has launched a life sciences hub in the centre of Cardiff aimed at nurturing the growing sector in the country.

The hub will offer space for events and training, video conferencing and a media room as well as access to the life sciences team from the Welsh Government, representatives of the aforementioned fund and support from professional advisers, patent agents and technology transfer specialists.

The hub, which already has a co-operation agreement in place with MedCity, an initiative launched by Mayor of London Boris Johnson in April, is already running at over 50% capacity and tenants include Johnson & Johnson Innovation and GE Healthcare. Edwina Hart, Wales’ minister for economy, science and transport, said it will “cover all elements from funding to business support to international development and promotion, bringing the life sciences sector”. She added that the hub “is central to our long-term strategy to grow the sector to deliver at least £1 billion of extra value by 2022”.

Sir Chris Evans, said that “often the hardest part of being an emerging business or an entrepreneur in the life Sciences space is having the availability of funds. But not just that, it’s also having access to the pooled experience and knowledge of those who have done it before and the professional bodies and advisers who regularly serve our industry”.

He added that Wales has “made those key elements readily available” through the fund and the hub “and it shows to the rest of the world that Wales is a great place for life sciences innovation.”

The fund has already committing £20 million in companies such as Simbec-Orion, ReNeuron  and Verona Pharma. In addition, the Welsh Government has launched Sêr Cymru, a £50 million scheme “to enhance and build on the research capacity in Wales”.