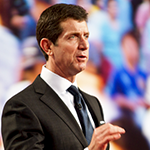 Johnson & Johnson has kicked off the reporting season by posting a 9.9% increase to $7.04 billion in pharmaceutical sales for the third quarter, helped by a strong showing of its prostate cancer Zytiga and the Bayer-partnered bloodthinner Xarelto.

Net income came in at $2.98 billion, pretty much the same as the like, year-earlier period, while group turnover  reached $17.58 billion, up 3.1%. J&J’s biggest seller was once again the Merck & Co-partnered anti-inflammatory Remicade (infliximab), sales of which were up 6.2% to $1.69 billion, while the latter’s follow-up Simponi (golimumab) shot up 43.8% to $266 million. The most striking performances came from Zytiga (abiraterone), which contributed $464 million to J&J's coffers, up 75.1%, while the anticoagulant Xarelto (rivaroxaban) brought in $246 million.

J&J chief executive Alex Gorsky (pictured) said the results "reflect the solid, demonstrable results in achieving our near-term priorities while also advancing our longer term strategic growth drivers". He added that "we continue to progress our pipelines with a number of regulatory approvals, the submission of new drug applications, and execution of strategic collaborations".

The results came just after J&J announced that Mark McClellan, the commissioner of the US Food and Drug Administration from 2002 to 2004 and then administrator of the Centers for Medicaid & Medicare Services from 2004 to 2006, has joined its board of directors. One of his roles will be to serve on J&J's Regulatory, Compliance & Government Affairs Committee, an area where the healthcare giant has had considerable problems in the last couple of years.

Meantime, J&J has submitted a file to the European Medicines Agency seeking approval for a once-daily single tablet fixed-dose antiretroviral combining Prezista with Gilead Science's cobicistat for use with other HIV-1 medicines.